15 Day Tour from New York to New York with Cosmos

You’ll enjoy guided sightseeing of the must-see sights in each of the cities, such as New York City’s Rockefeller Center; Boston’s Freedom Trail; Québec City’s Palace Royale, the historic square known as the birthplace of French America; Montréal’s 19th-century Notre Dame Church; Ottawa’s Parliament Hill; Toronto’s iconic, 1,815-foot-tall CN Tower; Washington DC’s most famous landmarks; and in Pennsylvania Dutch country, learn about the history of the Amish community - including their faith, culture, and way of life without the use of telephones or electricity in the home - at the Amish Farm & House.

Scenic drives also await you on this eastern Canada & U.S. tour. Travel through New Hampshire’s White Mountains, with some of the most beautiful scenery in the eastern U.S. In Canada, travel along the lakeshore and through the rich farmlands and vineyards of Ontario to Niagara Falls. In Niagara Falls, enjoy a cruise to hear the roar and view the falls up-close at the base of the falls. It is nothing short of spectacular! You’ll also enjoy a cruise in Thousand Islands National Park, where you’ll pass opulent summer homes, wooded islands, and lush landscapes.

Expand All
1 New York City
Welcome to the "Big Apple!" Your Tour Director is on hand this afternoon to answer any questions.
2 New York City - Boston
This morning, on the included sightseeing tour with a local expert, visit Broadway, the Empire State Building, Rockefeller Centre, Chinatown, City Hall, Wall Street, and Trinity Church. This afternoon, head for Boston - the "Cradle of American Liberty." Visit its historic landmarks, reflecting the important part it has played in the history of the United States.
3 Boston
On your morning guided tour of Boston, see Faneuil Hall, the Old North Church (where Paul Revere was signalled for the departure of British troops to Lexington), the Freedom Trail, and Boston Common. The afternoon is free to explore on your own. (B)
4 Boston - Quebec City Area
Journey through New Hampshire, passing the State Capitol at Concord and on to the scenic White Mountains. Continue to the Canadian border, where you'll notice a change in language and tradition as you enter the French - Canadian province of Quebec. Overnight in historic Quebec City on the banks of the St. Lawrence River. (B)
5 Quebec City Area
This morning, join your travelling companions on a unique optional excursion to the Erabliere le Chemin du Roy Sugar Shack. Visitors to the sugar cabin will enjoy a typical Quebec breakfast, along with a guided visit and presentation to explain the process of maple extraction. Afterward, return to Quebec City for a guided tour of Canada's only walled city, crowned by the turrets of Chateau Frontenac. Until the British victory of 1759, Old Quebec was the centre of New France; today, it's a UNESCO World Heritage Site. Within the walls reside the Place d'Armes, Laval Seminary, the star - plan Citadelle with grand vistas from its bastions, and ancient Place Royale. See the Old World houses crowding narrow streets in Lower Town and the historic Plains of Abraham, where General Wolfe stormed the slopes. The afternoon is at leisure.
6 Quebec City Area - Montreal
Today, drive to cosmopolitan Montreal, one of Canada's largest cities and home of Expo '67 and the 1976 Summer Olympics. Included guided sightseeing includes St. Joseph's Oratory, the lookout atop Mount Royal, once - walled Old Montreal, Notre Dame Church, the Seminary of St. Sulpice (built by the first missionary settlers), and modern Montreal.
7 Montreal - Ottawa
Drive west to Ottawa, Canada's beautiful capital. Guided city sightseeing includes Parliament Hill with its Gothic buildings, the Canadian Mint, the Rideau Canal, the hexagonal National Arts Centre, and stately residences and embassies. With a free afternoon you could visit the Canadian Museum of History, with panoramic views of Parliament Hill across the Ottawa River.
8 Ottawa - Thousand Islands National Park - Toronto
Trace the Rideau Canal south to the amazing Thousand Islands National Park. Enjoy many wooded islands along the St. Lawrence River, sprinkled with beautifully simple to opulent summer homes on your included scenic cruise.
9 Toronto
Setting Toronto's exciting architectural tone are City Hall; the downtown banking district; Roger's Centre; and stunning CN Tower, more than a third of a mile high. See all this and more on your morning city sightseeing tour. Then, spend the rest of the day exploring the city sights on your own, including Harbourfront, Ontario Place, and Chinatown.
10 Toronto - Niagara Falls
Travel south along the lakeshore and through the rich farmlands and vineyards of Ontario to Niagara Falls. Stop at Table Rock and hear the raging waters. Then, board your Niagara Falls sightseeing cruise for amazing close - ups at the base of the falls. NOTE: Operation of the Niagara Falls sightseeing cruise is subject to favourable weather conditions. When weather is unfavourable, a walking tour through the scenic tunnels will be substituted.
11 Niagara Falls - Lancaster
Leave Canada and head southeast through the Appalachian Mountains and along a portion of the Susquehanna River into Pennsylvania Dutch farm country. Tonight, join the optional excursion and experience a traditional Amish dinner.
12 Lancaster - Pennsylvania Dutch Country - Washington DC Area
This morning, stop at the Amish Farm & House. A Local Guide explains the faith, culture, and way of life of these people for whom tradition forbids the use of electricity or telephones in the home. On to Washington DC for an afternoon arrival.
13 Washington DC
The nation's capital is a sightseeing treasure trove, and your half day tour with a Local Guide visits the Lincoln and Washington Monuments, National WWII Memorial, and photo stops at Capitol Hill, the White House, and other well - known sights. Your Tour Director will also suggest a number of independent activities that explore different facets of this splendid city.
14 Washington DC - Philadelphia
Travel north this morning to Philadelphia for included sightseeing focusing on the important buildings of this historic city, the "Birthplace of the Nation."
15 Philadelphia - New York City
This morning, leave for New York City via Newark International Airport for those with homebound flights. Please schedule flights after 6 pm. For guests with flights out of Kennedy or LaGuardia airports, transfers are not included; we suggest booking flights after 7 pm. The trip ends in Manhattan in the late afternoon for guests on the New York city extension.

15 Day Eastern US & Canada Grand Vacation reviews from past clients of Global Journeys.

We had Eastern Canada on our wishlist, and our researching found this excursion, which worked in with our primary reason for the trip (our grandson got married in NY Central Park). The motor coach, driver and tour director were very good. The mix of travellers from 'related' countries (Australia, New Zealand, England, Scotland and Wales) was also very good, AND no one in the group was of those annoying types who was always late or overbearing.The selected hotels...read more were generally on par with expectations of Cosmos tours, with the odd occasional surprise. There was one disconcerting aspect, which we knew about when booking - predominately no included breakfast. This is a deviation from all other Cosmos tours that we have taken. The optional excursions were generally well utilised. The amount of spare time was more than sufficient for personal usage - either exploration or relaxation.

This was a great tour, more than I expected. The other 5 who went with me were really thankful to me for choosing this tour. Everyone said Niagara Falls was exciting. Though I learnt a lot about American history, it was great to learn about Canada as well. Having breakfast and visiting 'Maple Syrup' farm in Quebec was great, as we only knew about it from story books. I loved all the cities in Canada. Some of us had emotional experiences visiting Washington DC and New York monuments. I learnt...read more what makes America great and how much America has helped other nations.Our tour guide, Daryl had a good knowledge of the history and economy of both the countries. He was very thorough in his job. Once my suitcase ended up in someone else’s room, he came personally to assure me that I need not panic and found my bag within 20 minutes in such a big hotel. The only thing I would have preferred was that all breakfast and some dinners were included in the tour. It was difficult at times to hunt for food especially in the morning.Overall I am very pleased with the tour and Global Journeys for arranging my tour with Cosmos. Once again, I thank Hannah for organising it step by step, and answering all my questions promptly.

Niagara Falls was so great to see l can’t believe that it froze last year it was just beautiful. Quebec was a jaw dropping sight. The hotels were great and the mix of people were great.

The only disappointment was Boston and the hotel. It was hard to find my room. The lift wasn’t working and the hotel wasn’t in a very nice area and not close to restaurants etc. My door and the door next door was impossible to open. I managed to get another room which was just as well as the door wouldn’t close.Our Tour Director and coach driver were very good, I think we needed more time in Washington DC. I think breakfast should be included in each city as we were...read more on the move quite early every day. There was a mix up regarding Go-Link picking me up so I missed my flight and had to pay $US 307 to get on the next flight.

Once again had a great tour. Our tour director Matt was amazing. Thanks Cosmos for another wonderful holiday. Looking forward to my next adventure with you.

Earlybird Savings! Exclusive Savings. Deposit this month.
Welcome Back Credit Past Cosmos clients!
Past Client? Save an additional $100 per booking!
Key
Definite Departure. Minimum numbers reached for this depature to operate.
Available Departure. Minimum numbers not yet reached, so while this depature is expected to operate, it’s not yet a Definite Departure.
Not Available. Places on this departure are unavailable.
Exclusive Global Journeys Savings. Available for a limited time or until sold out.
Note: For all itineraries that include a cruise, Cosmos may apply a surcharge depending on the cabin categories available on your selected departure. Your Travel Advisor will provide this information in your quote if applicable. Your Travel Advisor will also apply any appropriate discounts automatically and detail any currently applicable 'Exclusive Specials'. 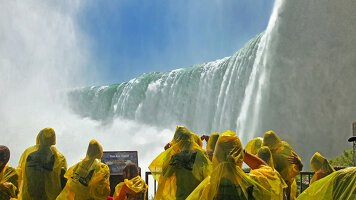 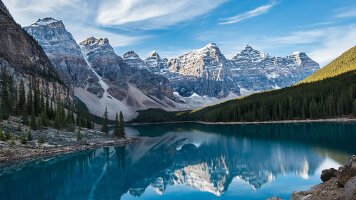 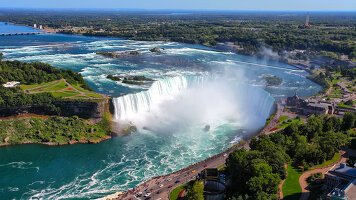 Eastern US & Canada Grand Vacation...
17 Days New York to New York
Operated By: Cosmos
Trip Notes
Trip prices are per person, and reflect applicable discounts. Discounts are subject to availability, exclusive to Global Journeys and may be withdrawn at any time without notice. Trip prices are correct at the time of the products going live, however are subject to confirmation at the time of booking. All trip information is correct at time of trips going live, however are subject to change by Cosmos. Full terms & conditions are available here.