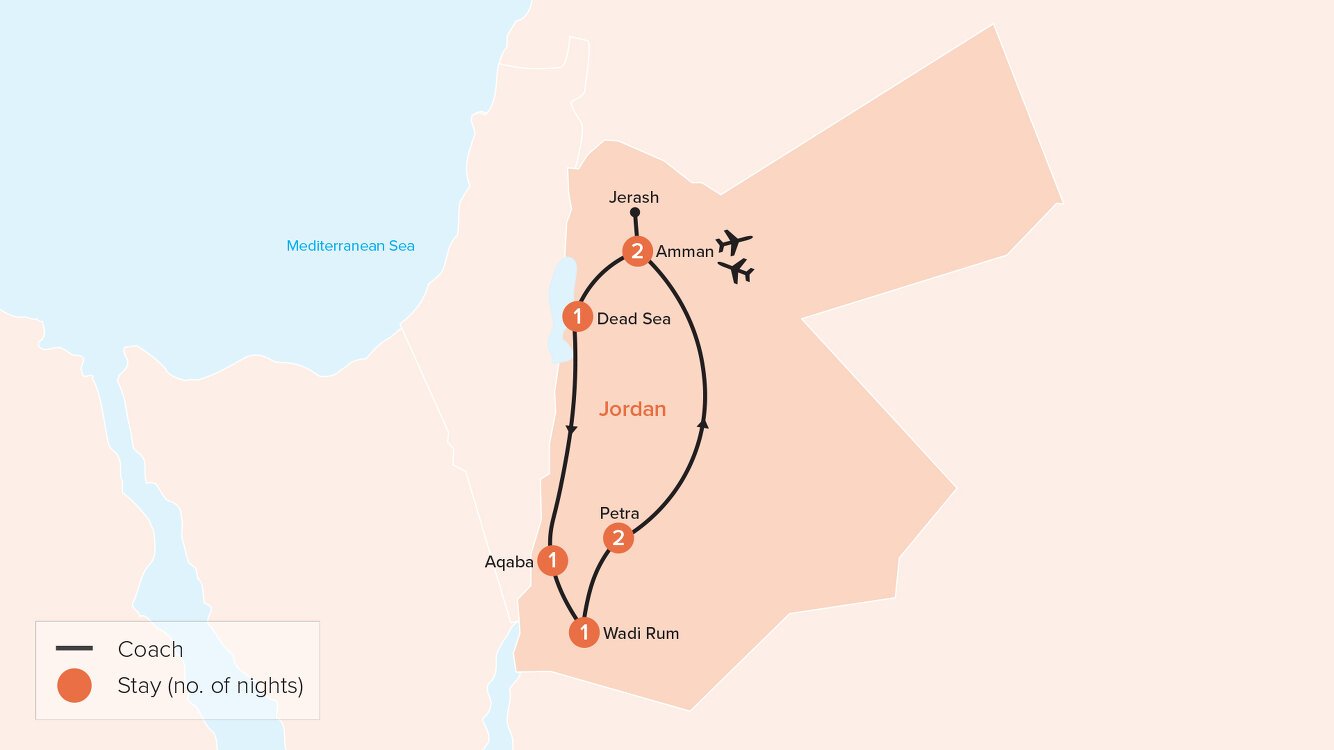 Book online and enjoy exclusive savings on Travelmarvel's 8 Day Hidden Jordan. A Jordanian land journey, Amman return, that takes you from the Dead Sea to Wadi Rum’s desert landscapes before revealing the treasures of Petra and Madaba.

On arrival in Amman, we will meet you at the airport and transfer you to your hotel. Settle in before meeting your Tour Director and fellow travellers during a Jordanian Welcome Reception. Stay: Amman, Rotana Hotel
Today starts with a guided tour of Amman. Discover the historic legacy of the city at the Roman Theatre and Nymphaeum, before taking in the enchanting Citadel. Then stroll via a traditional souk, where the sights and smells of spices and gold are sure to delight. Afterwards, drive to the ruined city of Jerash. A once great Roman city, here you will be transported back some 6,500 years in time to the ‘Pompeii of the Middle East'. Continue to the Dead Sea this afternoon where you will check into your hotel. Stay: Dead Sea, Crowne Plaza (B/D)

Insider Experience: Visit a popular spot to sample the Jordanian sweet kanafeh, a delicious cheese pastry soaked in a sugar syrup.
Spend the morning at leisure, perhaps floating on the salty waters of the Dead Sea. Later travel to Bethabara, the Baptismal Site of Jesus Christ. Arrive in Aqaba this afternoon, a picturesque port set on the Red Sea. This evening is yours to spend as you wish. Stay: Movenpick Resort & Residences Aqaba (B)
This morning is yours to spend at leisure. Perhaps take advantage of the hotel facilities, go for a dip in the Red Sea or enjoy a glass-bottom boat tour. Travel to Wadi Rum this afternoon where you'll join an Insider Experience. Continue on to your desert camp and savour a unique Bedouin dinner this evening. After dinner, perhaps enhance your experience and explore the uninterrupted desert night skies with some stargazing. A presentation and giant telescopes bring these star-studded skies to life. Stay: Wadi Rum, Al Sultana Camp (B/D)

Insider Experience: In Wadi Rum, take an exciting 4WD tour across the lunar-like desert landscapes. As the sun goes down, toast the day with a glass of champagne.
Today, a short drive brings you to Little Petra, an archaeological site where magnificent buildings have been carved into sandstone canyons. Continue on to your hotel before your included dinner. Stay Two Nights: Petra, Movenpick Nabatean Castle (B/D)

Insider Experience: Tonight, enjoy an evening of learning and fun, as you partake in a Jordanian hands-on dining experience at Petra Kitchen.
Following breakfast at your hotel, spend the morning exploring Petra. Famous for its rock-cut architecture, stone colours and formations, Petra is also known as the Rose City. Wander through a narrow gorge called the Siq and emerge to witness Petra's most breathtaking and elaborate ruin, Al Khazneh, also known as the Treasury. A little further along lies the Ad-Deir Monastery. This evening, perhaps witness Petra by Night as you wander through the lit-up temple complex. (B)

After breakfast, travel to Shobak and visit the earliest crusader castle in the region. Set within the walls of the old city, the fortified castle dominates the skyline and has been the setting for a number of battles. Continue to Madaba, best known as the ‘City of Mosaics', for its beautiful Byzantine and Umayyad mosaics. Madaba is most famous for the 6th-century mosaic map of Jerusalem and the Holy Land. Covering the floor of the Greek Orthodox Church of St. George, witness over two million pieces of coloured stone depicting the hills and valleys, villages and towns.

Afterwards, head to the mountaintop Memorial of Moses at Mount Nebo. It is here, tithe Bible states, that Moses was granted a view of the Promised Land that he could never enter. At the summit, enjoy captivating views of the Jordan Valley, Dead Sea and River Jordan. Continue to Amman this afternoon before sitting down to a Farewell Dinner tonight. Stay: Amman, Rotana Hotel (B/D)

After breakfast, your Hidden Jordan adventure comes to an end with a transfer to Amman airport. (B) 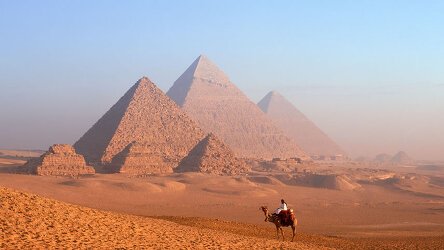 Treasures of Egypt and the Nile