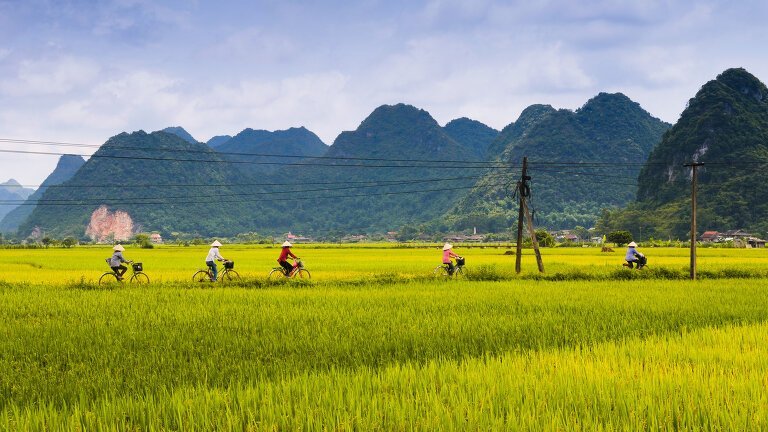 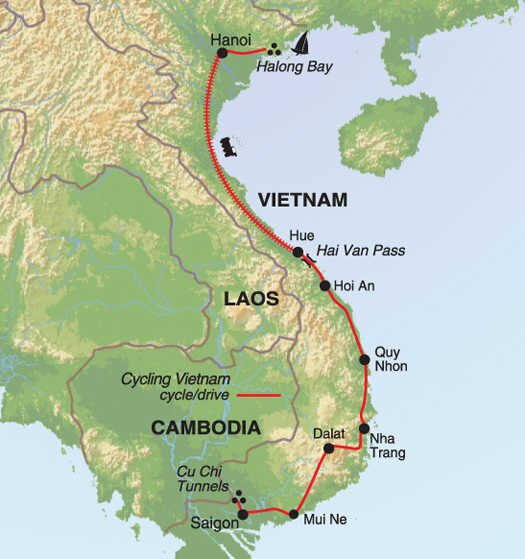 Book online and enjoy exclusive savings on Exodus 14 Day Cycling Vietnam- Premium Adventure. Awaken your senses as you ride from lively Saigon in the south to the alluring capital of Hanoi in the north! Cycle on tarmac roads through colourful fishing villages, folding rice terraces and mountains cloaked in jungle on this expertly guided two week premium cycling adventure. Shorelines of white sandy beaches also await, with time to unwind and recharge on a tropical island at the tranquil MerPerle Hon Tam Resort.

Continue on to the ancient trading port of Hoi An, home to temples and unique...read more architecture and delve into the peacefulness of rural Vietnam before ascending the thrilling Hai Van Pass, riding along twisting coastal roads that lead to remarkable views before finally experiencing the limestone cliffs of stunning Ha Long Bay as you enjoy drinks on deck at sunset!

Ho Chi Minh City (HCMC), formerly known as Saigon, is an exciting and absorbing city where bicycles battle with lorries and temples stand defiantly alongside modern developments. Devastated by the Vietnam War, Saigon is now a bustling free market city where anything goes. The Ben Thanh Market and Notre Dame Cathedral are within walking distance from our hotel and are highly recommended. This evening there will be a welcome briefing with your leader followed by a group welcome dinner where you can try local Vietnamese specialties. Stay: The Odys Boutique Hotel, Saigon (4 star).

This morning we drive out of the city, before riding to the Cu Chi Tunnels. This offers a great introduction to cycling in Vietnam and a chance to fine-tune the bikes. The tunnels were Viet Cong sanctuaries, used by the guerrillas as living quarters and escape routes. The network covers 3 levels and approximately 240km of tunnels.

Some parts have been widened for tourists, but the tunnels were originally very narrow and it is still necessary to crawl on hands and knees. Claustrophobes may prefer to stay outside in the sunshine!If you prefer not to visit the tunnels you can have an unguided free day in Saigon. Places of interest include: the Emperor of Jade and Giac Lam pagodas, the former Presidential Palace (now the Reunification Hall), Ben Thanh market and the War Remnants Museum. Stay: The Odys Boutique Hotel, Saigon (4 star).

After an early breakfast we head out of Saigon by bus and then start cycling towards the coast. We hit the backroads and head through tropical fruit and rubber plantations also passing some small fishing villages as we make our way closer to the coast finishing our ride in time for lunch. We then transfer approx. 3 hours to Mui Ne, a tranquil white sand beach where we can witness our first sunset over the Eastern Sea. We spend approx. 4-5 hours on the bus today. Stay: Sea Links Beach Hotel, Mui Ne (4 star).

We cycle towards Dalat; the route is undulating with occasional climbs. Along the way we pass coffee and tea plantations as well as flower gardens and pine forests as we reach higher altitude. We rejoin the bus before the road climbs steeply to the mountain town of Dalat. We spend approx 3.5 hours on the bus today.

Dalat is a pleasant hill station, formerly known as Le Petit Paris, and has been described as the most beautiful town in Vietnam. It was favoured by the French for its climate, and is now a popular honeymoon resort for the Vietnamese. Stay: Du Parc Hotel, Dalat (4 star).

Today's ride is predominantly undulating and approximately 30km downhill through pine forests and paddy fields as we descend nearly 1,500m travelling through the Bidoup Ba National Park. This area is home to rare pine forests as well as small villages inhabited by the ethnic minority people of the central highlands.

Once we arrive at the coast, we head by bus (approx. 1.5 hours) to the coast near Nha Trang before boarding a boat (approx. 10 minute transfer) to our tropical island paradise of MerPerle Hon Tam Resort where we will be for the next two nights. Dinner tonight is included at the resort's Sea Breeze restaurant which offers stunnning views of the ocean and surrounding islands. Today you can cycle up to 100km according to preference. Stay: MerPerle Hon Tam Resort, Hon Tam Island (5 star).

Having a rest from the bikes today we get the opportunity to really relax and unwind. We will join a boat trip in the morning for a spot of snorkelling and swimming in the turquoise sea before a seafood lunch is served. Returning to the resort, the afternoon and evening is then free for you to relax and enjoy the resort's world-class service and facilities and soak up the peaceful and charming atmosphere. Stay: MerPerle Hon Tam Resort, Hon Tam Island (5 star).
We set off early in the morning and first take a short boast transfer from Hon Tam Island back to the mainland. We then transfer through Dai Lanh & Ca Pass before setting off on our bikes at Vung Ro Bay where we ride along the coast to Tuy Hoa and O Loan Lagoon to Chi Thanh. In Chi Thanh, we stop for lunch and a short rest before continuing to ride to La Hai where we complete 90km of cycling today. From La Hai, we then transfer 1 hour to our hotel in Quy Nhon. (Approx. 2 hours in the bus today). Stay: Seagull Quy Nhon Hotel, Quy Nhon (4 star).

Leaving Quy Nhon, we travel through a new economic zone over the Thi Nai Peninsula and Nhon Hoi Bridge, the longest sea bridge in Vietnam. The coast line features secluded bays, sand dunes and beaches with colourful fishing boats bobbing on the Eastern Sea. We will cycle until we arrive at Phu Ly and then drive to Hoi An. If time permits, we will cycle the last 12km once we turn off Highway 1 into Hoi An. Hoi An, the original European trading port in Vietnam dating back to the mid-sixteenth Century is now a living museum, with attractive wooden merchant's houses and pagoda-style temples with Chinese, Japanese, Vietnamese and European architectural influences.

It is also a atmospheric place to wander around and enjoy the thriving riverside market. This evening, the group will dine at a local restaurant featuring a menu with a fusion of central Vietnamese dishes. We spend two nights in Hoi An, a fantastic location to buy local art or have some clothes tailor-made for you. Its best to bring a picture or a sample of what you want made. Approx. 6 hours in the bus today. Cycle approx. 50km. Stay: Hoi An Blue Sky Boutique Hotel & Spa, Hoi An (4 star).

This morning we take a guided walking tour of Hoi An to explore some of the structures of historical significance in the Old Town, including bridges, temples, wells and houses. Those less interested in architecture can cycle the 5km to the lovely Cua Dai beach or cycle to the Marble Mountains, which are 19km from town. These five marble hills, formerly islands, contain many caves, some of which were used as Buddhist (and Viet Cong) sanctuaries.

Also nearby is My Khe beach, a famous US R & R spot in the war, and Da Nang, where there is a Cham Museum, which despite being in poor condition, is very interesting. It is also possible to visit My Son, one of the most important Cham temple sites in Vietnam where Cham kings were buried as early as the fourth century. Although wartime bombing has destroyed much of the site, there are a number of interesting stone towers and sanctuaries. Stay: Hoi An Blue Sky Boutique Hotel & Spa, Hoi An (4 star).

Today we turn north again for the drive/cycle to Hue. The route traverses over the spectacular Hai Van Pass - the 'Pass of the Ocean Clouds'. The views are stunning. Though, those who prefer to avoid the 580m climb can always take a lift in the support vehicle. Once at the top it will all seem worth it as you plummet back to the ocean, then continue through small villages and timeless rural scenes to the outskirts of Hue, from where we transfer to our hotel. In the evening, the group will enjoy dinner at a restaurant situated in the heart of Hue. Approx 2.5 hours in the bus today. Cycle approx. 80km. Stay: Romance Hotel, Hue (4 star).

Hue is often claimed to be the cultural and historic centre of Vietnam and there is plenty to see. Today we take a guided tour of the city and surrounding tombs. The most memorable site is the citadel, with walls six miles in length: inside are the palaces and halls of the Mandarins, and the remains of the Forbidden Purple City, where only the emperor and his eunuchs and concubines were allowed. We then take a boat along the Perfume River to the elaborate tombs of the Nguyen emperors, who ruled Vietnam from Hue. Tu Duc's Tomb is very elaborate and set in beautiful gardens.

Along the way we will visit the famous Thien Mu Pagoda. The pagoda was a centre for anti-government protests in the early 1960s and it houses the Austin car that transported a monk, Thich Quang Duc, to Saigon in 1963 where he burned himself in protest against the president. The photograph of his self-immolation was printed in newspapers all around the world. Later, in the evening we will board the Reunification Express for the overnight ride to Hanoi, 688km to the north. Stay: Overnight Train (4 berth cabin).

We usually arrive in Hanoi in the early morning and stop for a local breakfast of Pho Noodle soup and a chance to taste delicious Hanoi coffee whilst also stretching the legs, before we are met by our bus for an approximate 4 hour drive to Ha Long Bay. This is one of the most stunningly beautiful sights in South East Asia with around 3000 limestone peaks rising directly from the clear emerald sea.

We cruise amongst this amazing karst scenery, stopping to kayak in the sea allowing us to get to places inaccessible by boat (weather permitting) and enjoy a seafood lunch on board. Later in the afternoon, join your expert leader and group for a drink or two on the top deck whilst watching the sunset in the bay before spending the night on board in twin share cabins. Stay: Syrena Cruises (join in basis), Ha Long Bay.

We continue to cruise around Ha Long Bay this morning before returning to port. Your leader will then introduce your group to the Ha Long Women's Association in the Hon Gai township, a local sustainable initiative that is committed to cleaning up waste in Ha Long Bay and upcyling any waste where possible into items of value.

Here you'll meet the local women and witness how they upcyle rubbish materials into beautiful handcrafted products and also may have the chance to try your hand at upcycling as well. We then drive back to Hanoi for our final evening together with a farewell dinner at KOTO (Know One, Teach One), a well-established training restaurant for disadvantaged youths where you'll be served a blend of Vietnamese and South-East Asian foods. Stay: La Belle Vie Hotel, Hanoi (4 star).

For land only clients, the tour ends this morning in Hanoi after breakfast. If you'd like to extend your stay in Hanoi and discover more of this charming city, please enquire with our sales or customer operations team about requesting additional accommodation after your tour. 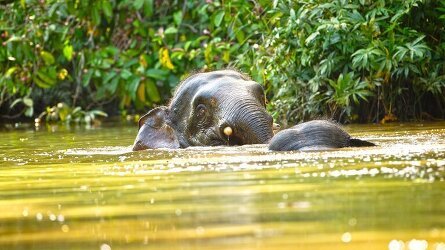 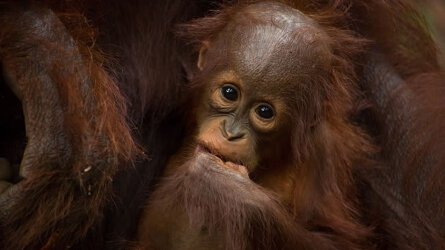 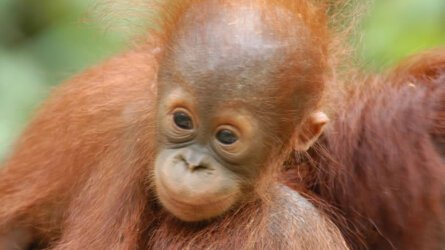 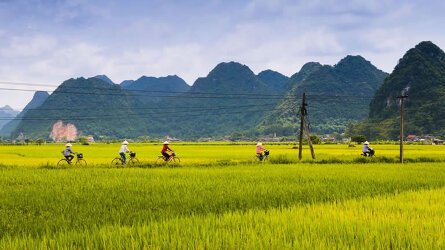