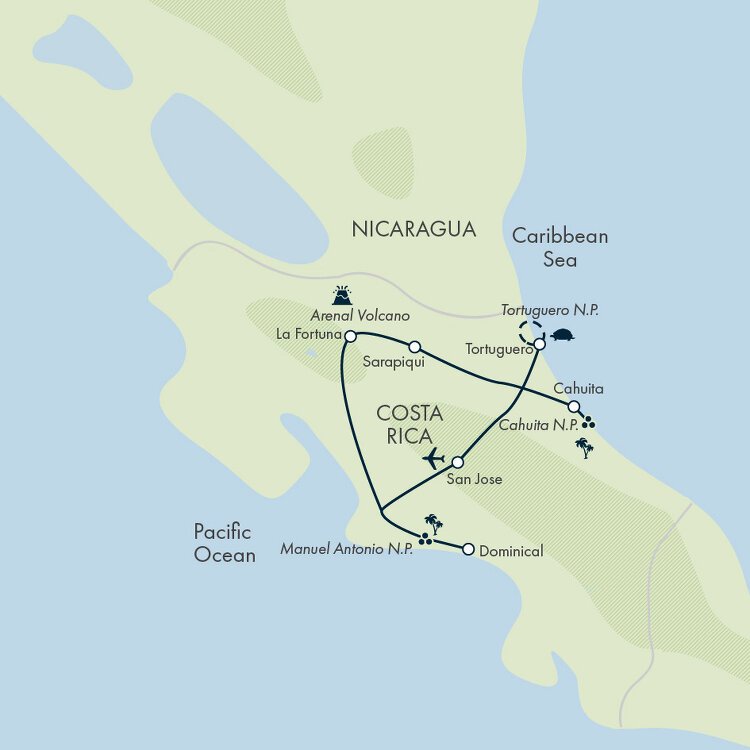 Book online and enjoy exclusive savings on Exodus 15 Day Costa Rica Adventure Family Holiday. Costa Rica is a natural paradise, complete with volcanoes, rainforest, waterfalls, wildlife and beaches. Start your Costa Rica family holiday by travelling into the steaming jungle and explore the waterways of Tortuguero by boat, in search of monkeys, toucans and other colourful birds. Visit the Sloth Sanctuary and meet some of its famous inhabitants, stars of their own Animal Planet TV show. Enjoy a night walk in the rainforest, try white water rafting (optional) and splash around in thermal pools at...read more a waterpark near Arenal Volcano. There's beach time too as we head to both Cahuita on the Caribbean coast and Manuel Antonio on the Pacific, where jungle cascades down to white sandy beaches.

The group flight usually arrives into San Jose this evening. Land Only clients should aim to arrive at the hotel this afternoon/evening. This evening's welcome briefing is the perfect opportunity to meet your guide and get to know your fellow travellers. Stay: Country Inn & Suites (or similar) Comfortable Hotel.

After breakfast, you will meet your guide at 9:00am in the hotel lobby for a short drive to La Paz Waterfall Gardens. Located within the transitional forest between the Central Valley and the Northern Lowlands, La Paz Waterfall Gardens hosts a wide variety of plants and bird life amongst stunning scenery. A short walk along a trail within the rainforest brings us to a great viewpoint from which to watch the cascading falls.

Entrance to the gardens includes a visit to the petting zoo, frog exhibit, aviary and butterfly observatory. In addition monkeys, sloths and toucans also inhabit this area, providing a great introduction to the incredible diversity of Costa Rica. The afternoon is free to relax and enjoy the hotel swimming pool, or explore San Jose at your own pace. Stay: Country Inn & Suites (or similar) Comfortable Hotel (B).

We have an early departure this morning, leaving San Jose behind as we travel to the north-east of Costa Rica to Tortuguero National Park in the Caribbean Lowlands. Accessible only by boat or light aircraft, Tortuguero's vast network of waterways, canals and swamps is remarkably tranquil, unspoilt and devoid of noise pollution. On reaching the pier we board a small motorboat for the one hour fifteen minute journey to our lodge, which is nestled on a small strip of land between the Caribbean Sea and the main lagoon.

Our afternoon is spent in Tortuguero village, where it's possible to visit the Sea Turtle Museum (a donation will be requested at the entrance). Tortuguero is probably most famous as a nesting site for the endangered Green turtle, which can be seen arriving onto the beach to lay eggs from late July to October (as part of an optional excursion). Hawksbill, Loggerhead and Giant Leatherback turtles also nest in this region, and during November to January baby turtles start to hatch and make their way towards the ocean. Stay: Pachira Lodge (or similar) Comfortable Hotel (B/L/D).

A morning boat trip enables us to discover the extraordinary flora and fauna of Tortuguero, passing serenely along the waterways. At this time of day, wildlife is usually at its most active and with the help of our expert guide we are likely to encounter monkeys, caiman, iguanas, butterflies and many of the 300+ bird species recorded here.

We return to the lodge for a hearty breakfast by the river. The lodge is a tranquil spot to relax this afternoon if you want to take some time out to enjoy the facilities, or alternatively you can join a second boat trip, visit the beach or follow a short walking trail through the forest. Stay: Pachira Lodge (or similar) Comfortable Hotel (B/L/D).

We leave Tortuguero the same way we arrived by taking a small boat to the pier. Our bus will be at the pier waiting to drive us to the region of Cahuita on the Caribbean coast, where we check into our hotel and have the rest of the afternoon to enjoy the pool, beach or discover our new surroundings. Caribbean culture pervades this part of Costa Rica and is reflected in the music, food and laid-back lifestyle. Cahuita's famous white-sand beach is fringed by tall palms behind which the dense, wet tropical forest of Cahuita National Park can be found. Stay: Atlantida Lodge (or similar) Comfortable Hotel (B/L).

After breakfast we drive to Aviarios del Caribe, Costa Rica's famous Sloth Sanctuary. This rescue and rehabilitation centre conducts research into sloths and works tirelessly with the goal of releasing sloths back into their natural habitat. It was recently the subject of an Animal Planet TV show called 'Meet the Sloths'. You'll learn all about these fascinating animals on a two hour tour of the sanctuary, where you'll take a boat tour along the river to see sloths, monkeys, butterflies and birds in the wild.

This afternoon we return to Cahuita and visit the National Park, following a coastal trail through the rainforest. Cahuita National Park has 2711 acres of land and 600 acres of coral reef, which forms Costa Rica's largest reef system. Stay: Atlantida Lodge (or similar) Comfortable Hotel (B).

We depart for Sarapiqui, a region blessed with abundant vegetation and the beautiful Sarapiqui River. Sarapiqui is one of the main areas of banana production in Costa Rica, although coffee, cardamon, cacao, corn and other fruits are also grown here. This region is also gathering a reputation as a great spot for adventure seekers with plenty of optional activities to keep you entertained! In the evening we take a night walk through Tirimbina Biological Reserve to have a different perspective on the rainforest and its many inhabitants. Stay: El Bambu Hotel or Quinta Sarapiqui (or similar) Comfortable Hotel (B).
There are various optional excursions to try today: join a chocolate tour in Tirimbina Biological Reserve, take a safari floating trip down the Sarapiqui River, have a go at white water rafting on grade II and III rapids or join a canopy tour and zip-line through the forest. Alternatively, there are a number of nature walks to enjoy in the beautiful surroundings. Stay: El Bambu Hotel or Quinta Sarapiqui (or similar) Comfortable Hotel (B).
We transfer to the area surrounding Arenal Volcano. Following a massive eruption in 1968, Arenal was Costa Rica's most active volcano until recently when it entered a resting phase. As well as the volcano, this region has plenty to offer with thermal waters, waterfalls and Lake Arenal waiting to be discovered. The rest of the day is free to explore the area either at your own pace or on one of the optional excursions available. You could take the Sky Walk (canopy walk) or Sky Trek adventure (which has an optional zip-wire through the canopy) or enjoy some time at the hotel swimming pool! Stay: Arenal Montechiari or Los Lagos Hotel (or similar) Comfortable Hotel (B).
This morning we have a guided nature walk through Arenal Volcano National Park. The park has a great system of trails passing through secondary forest and near lava fields created by previous eruptions. In the late afternoon we visit Kalambu Hot Springs as a group to enjoy a hot thermal bath from the volcanic spring water and have a chance to splash around – a refreshing end to the day. Please note that on weekends or Mondays we will visit an alternative hot springs called Ecotermales. Stay: Arenal Montechiari or Los Lagos Hotel (or similar) Comfortable Hotel (B).
We travel southeast along the coast, following the Pan-Am Highway to Dominical, passing African oil palm and teak plantations on the way. Our hotel is on the coast near Dominical, around 50 minutes south of Manuel Antonio. The hotel is set in lush gardens overlooking the river and just a short (20 minute) walk to the beach. We spend the next three nights in Dominical. Depending on our time of arrival we should have some time to enjoy various optional activities this afternoon, visit the beach or enjoy the hotel swimming pool. Stay: Villas Rio Mar in Dominical (or similar). Occasionally we stay in Cuna de Angel or Vista Ballena in Uvita instead. Stay: Comfortable Hotel (B).

Today we drive to Manuel Antonio National Park. This park consists of a vast marine reserve as well as 1,700 acres of mangrove swamp, primary and secondary rainforest. The forest vegetation stretches as far as the high-tide line and provides a stunning backdrop to the expansive sandy beaches, forested islands and dramatic rocky headlands. We have a guided nature walk today which should enable us to have some very close wildlife encounters. White-faced Capuchin monkeys play in the trees and are frequently sighted on the beaches, whilst noisy Howler monkeys are usually heard moving through the trees and calling to each other before they are seen.

The endangered Titi monkey (Squirrel monkey) are fewer in number but can sometimes be spotted in this area. Iguanas, agouti and two and three toed sloths are also commonly sighted in the national park. Manuel Antonio's beaches are considered to be some of the most beautiful in the country. In the late afternoon we return to our hotel. Stay: Villas Rio Mar in Dominical (or similar). Occasionally we stay in Cuna de Angel or Vista Ballena in Uvita instead. Stay: Comfortable Hotel (B).

Today has been left free for you to relax – make the most of the hotel swimming pool, visit the beach or explore the local area. There are a few optional activities available in the Dominical area, such as a whale and dolphin watching boat trip (seasonal, from mid-July to October and mid-December to March) or visit the indigenous territory of Boruca. Stay: Villas Rio Mar in Dominical (or similar). Occasionally we stay in Cuna de Angel or Vista Ballena in Uvita instead. Stay: Comfortable Hotel (B).
Today we return to San Jose. If you wish to travel into the downtown area by taxi you will have some time to see the modern capital and pick up some souvenirs. Alternatively you can relax by the hotel swimming pool. Stay: Country Inn and Suites (or similar) Comfortable Hotel (B).
The trip comes to an end today after breakfast and it's time to bid Costa Rica and the rest of the group goodbye. Transfers to San Jose airport are available to all clients on group flights today (B). 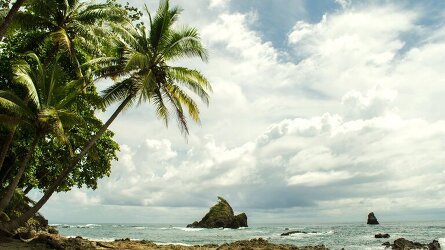 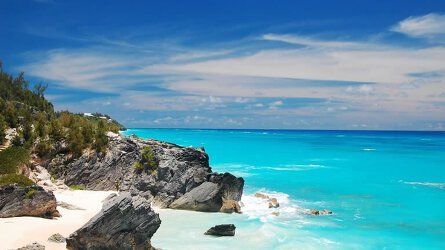 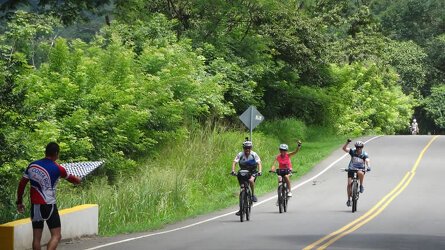 From Delhi From Marrakesh