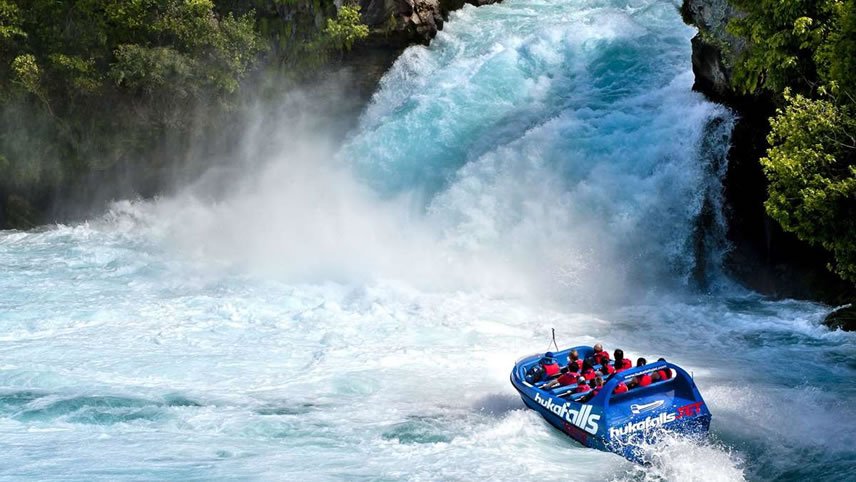 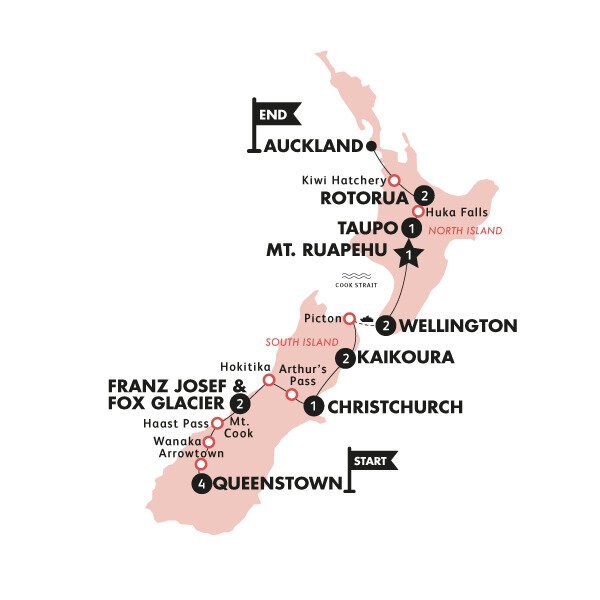 Book online and enjoy exclusive savings on Contiki's 16 Day Kiwiana Panorama Plus Kaikoura. Feed your adrenaline cravings - relaxation is overrated! Kick it off in Queenstown, the adventure-adrenaline Capital of the World. Ride the Shotover Jet (until Sep 2018) & get a slice of the action! Ever tried bungy jumping, or luging? Now's the time! As you head North, see stunning glaciers, visit Christchurch, try a Maori 'hangi', cruise Lake Taupo & hit Rotorua to try the 'Zorb' or luge!

Kia Ora and welcome to New Zealand, the land of Hobbits and an epic Rugby team, not to mention adrenalin, wildlife, surfing, beach breaks...are you hooked yet? You'll be hitting up the stunning South first, arriving into Queenstown with a free afternoon to kill. This being the adventure capital of the world though, we really doubt you'll struggle to stay entertained. Tonight you'll meet up with your Contiki Crew & fellow adventurers, no doubt swapping notes on which thrill seeking activity to tick off first. Stay: Jucy Snooze Hotel (or similar)
Today is yours to get acquainted with Queenstown and spend some time mulling over the activities up for grabs in the next two days. (B)
With our last day in adrenalin city edging closer, this is the time to push yourself to the limits and jump over any mental barriers you've put up around yourself. Embrace the spirit of adventure and conquer those niggling fears once and for all. For those who did their dash yesterday, a day staying mellow and enjoying this beautiful region will prove more than sufficient. (B)
It's times like this that you really start to work out what sort of traveller you are. And human for that matter. You might be the one trailing through wine country and doing a spot of horse back riding, or you may be that guy that crams in a bungy jump, a skydive and a heliraft & still craves more. It's your holiday - run wild as you see fit. (B/D)

Time to return our adrenalin levels to normal and make tracks to the wild (and often wet) West Coast and it's towering glaciers. But before we do, bridge bungy jump, anyone?Enjoying our scenic drive we'll stop for lunch in Wanaka, a pretty ski resort town situated on a lake front and dwarfed by mountains. This town is fast becoming one of NZ's most popular spots, and a trip to the 'Dough Bin' for a luscious pie should be high on the list today.

Our first piece of NZ eye-candy comes in the form of Hasast Pass, beautified by ancient rainforests, small glaciers and waterfalls. Note how the scenery changes as we roll away from Queenstown through the Southern Alps. Playing host tonight is the town of Franz Josef, home to some of NZ's finest natural beauty with bushlands and glaciers that almost reach the sea. Tomorrow we'll be out and about making the most of it - who's excited? (B/D) Stay: Rainforest Retreat (or similar)

This morning will be another big ol' tick off the list as we take to the ice of Franz Josef Glacier. We've got a heli ride over the glacier up for grabs, or the opportunity to carve your own Pounamu (jade) pendant, under the tuition of a Maori mastercraftsman. Pounamu is sacred to the Māori people, and this is a great way to learn about its cultural significance, while also creating a beautiful please of jewellery. An optional highlight today is a boat cruise across Lake Mapourika. But this ain't your ordinary boat cruise. You'll cruise up the glassy lake, framed by glaciers and mountains, before switching to a stand up paddle board and gliding along a narrow estuary. This takes you to your journey's destination, the Okarito Kiwi Sanctuary, where you'll get to meet New Zealand's adorable but vulnerable national bird. (B)
Armed with a new found appreciation for frozen water, we hop back on the coach & start making our way back to Christchurch. In the gold rush town of Hokitika we'll watch authentic carvers get to work on green jade and take a look at traditional Maori art. Back on the coach we're coastline bound to one of the islands most jaw-droppingly beautiful spots... Take in the beautiful scenery as we wind our way across the highest and most spectacular mountain pass across the Southern Alps. Tonight we'll sleep well in Christchurch, drifting off to the pleasant memories of NZ's natural beauty that seasoned our day. (B) Stay: The Breakfree on Cashel Hotel (or similar)

We'll set off on an inspiring tour of Christchurch this morning, the city that was totally rebuilt after the Christchurch earthquake. Look out for the Cardboard Cathedral, which as the name suggests, is the only cathedral in the world to be built mostly from plain old cardboard! After that, it's another jaw-dropping drive up to the top of the South Island. The coach cuts across the Canterbury Plains to Kaikoura. Arriving in Kaikoura will see us amongst a seaside settlement known for whales & dolphins, so have those cameras at the ready as we roll around the coast. We'll stop at a seal colony, where you'll struggle not to break into a collective 'cuuuute' as you watch these guys sunning themselves on the rocks.

Next up, we'll visit Kaikoura Wildlife Rescue to meet a local wildlife biologist, Sabrina Leucht, who has been working to build a dedicated wildlife hospital in Kaikoura. We'll learn about the types of wildlife we might encounter here, which threats they face, and what we can all do to make a difference - locally and in our own hometowns. After a busy day of wildlife wonders, we'll check into our seafront hotel, before heading out for a spot of dinner. Did you know that Kaikoura literally translates into 'eat (kai) crayfish (koura)'? So, no prizes for guessing what type of local cuisine we'll be trying! (B) Stay: Sudima Hotel Kaikoura

We all love a free day - especially one spent in beautiful Kaikoura! We recommend taking a whale watching tour, where you'll have the opportunity to see giant sperm whales in action, as well cute seas, dusky dolphins, and the endangered wandering albatross. Other free time add-ons include a thrilling helicopter ride over the Kaikoura Peninsula, a kayak trip across the coastline, and more. We'll stay another night in Kaikoura after an action-packed day, before heading to Christchurch tomorrow morning. (B)
After breakfast, we'll head back on the Contiki coach, destination Wellington: the capital of NZ since 1865, when it replaced Auckland. Almost thirty years later, Wellington parliament was the first in the world to allow women the right to vote. A pretty cool city all in all. By the afternoon, we'll have reached Wellington, just in time for a tour of the city. After our orientation through the narrow streets, a night on the town will be on the cards, plus an optional dinner to start the night off as we mean to go on. (B) Stay: Mercure Abel Tasman Hotel (or similar)
Ready to explore Wellington in all its glory? Today, we'll head to a local cafe and try the famed flat white coffee in its city of origin (sorry Australians). Caffeinated and refreshed, we'll take a trip to Zealandia, a 225-hectare (basically massive) eco-sanctuary that protects over 40 rare native wildlife species. Because Zealandia is fully fenced, you'll be able to walk alongside incredibly rare birds like the hihi and the takahē. Look out for the tuatara, a prehistoric reptile known as a 'living fossil', which can only be found in New Zealand! (B)
We wave goodbye to Wellington and its beautiful scenery and we prepare ourselves for our next adventure – and trust us, this one is bucket-list worthy. Known as the après-ski capital of the North island, Ohakune is a tranquil town with stupendous view. Today you have the option to go mountain biking along one of NZ's most picturesque track, "the Old Coach Rd" or spend the day bettering your skills on the slopes or generally treating yourself to all the snowy based activities on offer, then tonight snuggle down in our Special Stay ski lodge, located in prime position at the base of Mt. Ruapehu. (B/D) Stay: Kings Hotel Ohakune
Wake up in the spectacular surroundings of Mt. Ruapehu with the epic views of the volcano, and you have the option this morning to go mountain biking along one of NZ's most picturesque track, "the Old Coach Rd" before we head to Taupo. Volcanic peak views & trout fishing will seamlessly slip us into quaint lake life. But don't be fooled by the seemingly still scenery - a bungy jump or skydive are both on the menu if that adrenaline itch needs scratching. (B) Stay: Lakeland Hotel (or similar)

As we leave Lake Taupo keep an eye out for even more recognisable ‘The Lord of the Rings’ backdrops.220,000 litres (58 000 gallons) of water gush over Huka Falls per second. Just let that sink in for a minute. Wild, right? Even wilder still is the Huka Falls Jet experience – a thrilling ride that will get you experiencing the full force of the falls and leave you with even more of a taste for adventure. When you catch your first whiff of that… ‘unusual’ sulphur smell, you’ll know we’ve arrived in Rotorua.

Upon arrival in Rotorua we get to learn some fascinating info on NZ's national birds, as well as watch new lives hatch right in front of our eyes! How impressed are you right now? Soak in a hotspring, go skydiving or take a canopy tour - there's plenty of time for you to make the best of this town. Tonight we enjoy a Maori dance performance and feast on a Hāngi dinner that is sweetly roasted in the ground. (B/D) Stay: The Sudima Hotel Lake Rotorua (or similar)

The day is yours to roam free in this geothermal paradise. Soak in a hot spring, go white water rafting or hike up a volcano. The options are limitless and the decisions are yours. We recommend the Rotorua Dawn Canopy Tour, exclusive to Contiki, where you'll watch the sun rise, eat some breakfast and drink coffee up in the towering trees as the birds make start their morning calls. Then, you'll get to soar 1200m through the forest on the ultimate zipline adventure. (B)
After breakfast and a bit of caffeine, we'll head to Auckland and arrive by lunch to explore the city. Contiki coach song ideas anyone?We'll end our Contiki trip in Auckland, but not before a day of sightseeing and activities across the city. Here we've got a array of awesome Free-Time Add-Ons to choose from. Adrenaline junkies, get ready for a bungee jump, climb over the iconic harbour bridge or sky jump off the Skywalk. For those who prefer to keep two feet on the ground, why not get your taste buds tingling with a multi-sensory icecream experience at Giapo Chef's Table? Or if you prefer, walk the city and explore at your own pace - what will grab your attention today in this vibrant city? A evening draws near, it's time to say our goodbyes, as your trip ends here in Auckland. New Zealand, we'll never forget you! (B) 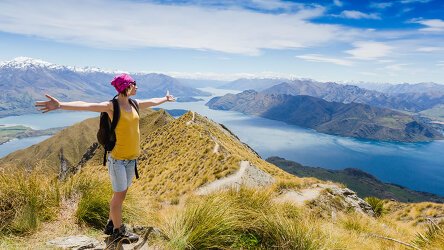 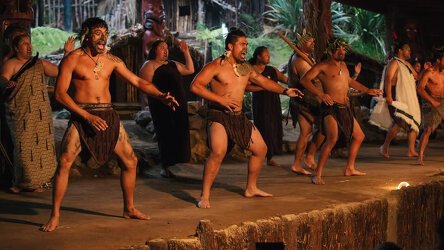 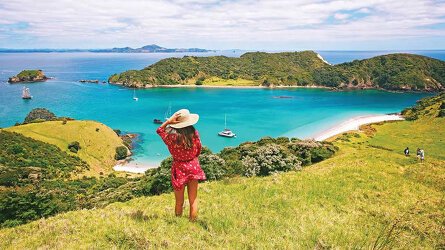