Your Complete Guide to the Great Wildebeest Migration in East Africa 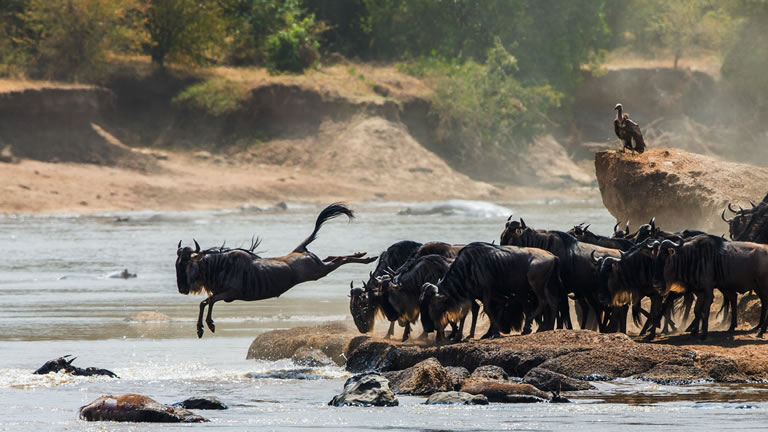 What is the Great Wildebeest Migration?

The Great Migration is a natural phenomenon that sees herds of wildebeest along with other animals such as zebra and gazelle thunder through the wilds of Tanzania and Kenya in search of greener pastures. Rather than a one off event, it is a year round cyclical movement as they make their way clockwise through the Serengeti and Masai Mara spurred on by the rainfall.

With over 1.5 million wildebeest covering roughly 1,000 kilometres (621 miles) or more each year, it is the biggest and longest overland migration on the planet. The sheer magnitude makes it an incredible wonder to behold.

This spellbinding mass movement is the sum of smaller ones. Smaller knots of wildebeest and zebra flank the mega wildebeest herd, taking things at their own pace and spreading out across the landscape. While some stragglers arrive at fresh grazing sites days after the frontrunners, each beast follows the same instinctual drive that sees the whole herd flock from drier areas to nutrient-rich ones, circumnavigating the incredible savannahs of East Africa. 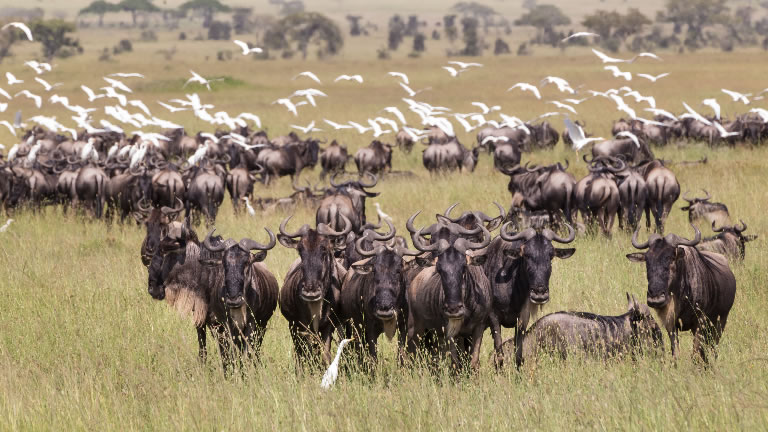 What can I expect to see during the migration?

Having such a large number of wildebeest moving in unison, each weighing up to 250 kilograms (550 pounds) and kicking up dust along the plains of Tanzania and Kenya is a sight to behold. With it comes a concentration of other wildlife that further enrich the experience, with hungry big cats tailing the herd and crocodiles lying in wait beneath the river surfaces.

The plain dark coats of the wildebeest are contrasted on the horizon by vivid black and white stripes as they move in perfect harmony with accompanying zebras. The two species work symbiotically on the savannahs, feeding on different parts of the same grasses. You’ll also get to see the usual suspects that call the plains home irrespective of the migration, eyeing the influx of wildebeest warily (or hungrily) as they spill onto the grasslands.

One of the highlights of the migration is calving season (January – March) on the Serengeti, when roughly half a million wildebeest are brought into the world in a flurry of hooves and wobbly new life. During the peak birthing period (which usually lasts about three weeks from mid-February) as many as 8,000 wildebeest are born each day.

In under five minutes earth side these shaky newborns find their feet and join the running herd, with no time to waste as onlooking predators lick their lips in giddy anticipation. Witnessing such a mass of new life balancing on spindly legs and protected by the hefty bearded adults that they are set to become is pretty spectacular – the circle of life at full pace. 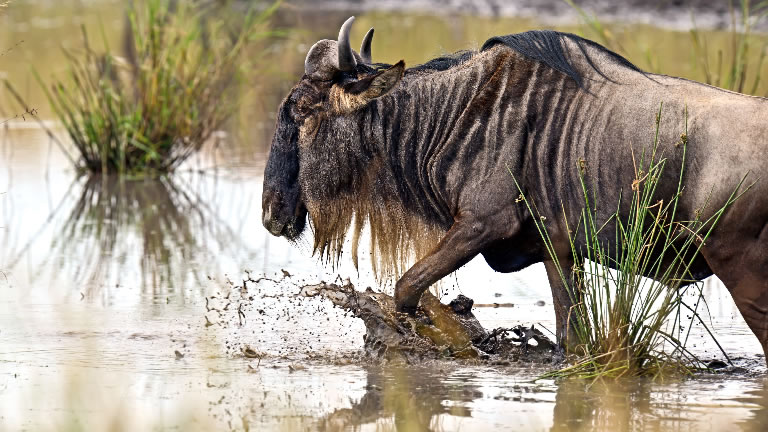 Nature can sometimes seem cruel, and some wildlife encounters can be equally confronting as they are amazing. Roughly 250,000 wildebeest perish during the migration, some succumbing to thirst, hunger or exhaustion, and others falling victim to hunting predators. If you have you been scrolling through images of the Great Migration, then you’ve certainly seen some of wildebeest bounding nervously into the Grumeti and Mara Rivers where crocodiles await keenly. A mass of panicked hooves churn the waters with the promise of greener pastures on the other side. Many find a grim fate in strong jaws or get injured during the mayhem, falling prey to an incredibly raw display of nature.

When planning your African safari, it is hard to predict exactly when or where you will see the migration in full swing, and what you will see at any given time or place depends on the season East Africa is experiencing. Many travellers hope to see a river crossing during their trip, however, it is difficult to anticipate when they will occur. Sometimes the wildebeest stay on the banks for days after reaching the river until, suddenly, the first hoof hits the water followed by millions more.

Some wildlife tours will regularly move camps to offer flexibility and optimise viewing, while some use static lodges and rove across the plains in dedicated safari vehicles each day to showcase the phenomenon of the migration. These are run as small group tours so that you can truly immerse yourself in the destination and the experience, gazing in awe out of your 4WD safari vehicle as you bounce your way across the landscape.

Many tours of East Africa also offer the option to see the Serengeti or Masai Mara from above, floating over the vast expanse in a hot air balloon, the breathtaking plains rambling into the distance speckled with wildlife. This is an absolute highlight for many travellers and an experience that you shouldn’t miss if you get the chance. 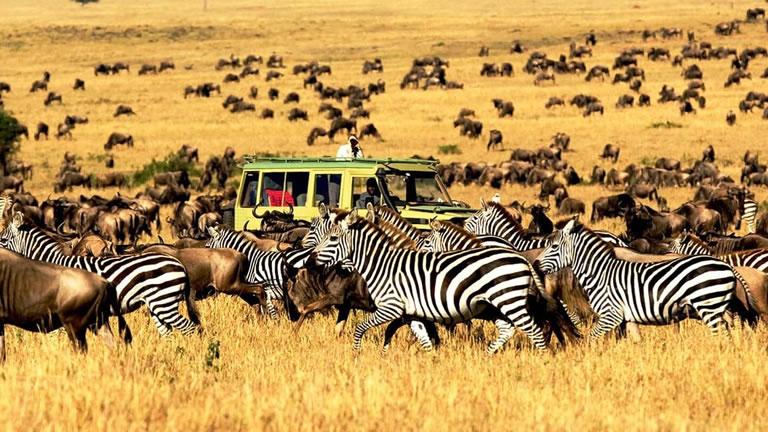 What is the best time and place to see the Great Wildebeest Migration?

While each migration is unpredictable and reliant on the weather, it follows the same general pattern every year. Calving season usually takes place from January through March as the herd roves the southern Serengeti before making their way north to the Masai Mara. They will generally pass through the west and northwest Serengeti from May through to July, before crossing into Kenya.

You may see herds arrive on the plains of the Masai Mara as early as July after braving the crocodile ridden river crossings. They stay as late as November enjoying their due reward before starting their trek back south, where pregnant mothers will give birth in the bowels of the Serengeti and the entire cycle starts again. Naturally this can change in any given season. With 1.5 million wildebeest spread across some vast distances at any given time, the head of the herd and the stragglers will call different parts of the plains home.

If you are planning your African safari around the migration, then this general guide may help narrow down your travel dates and assist you to choose an itinerary to catch one of the Seven Natural Wonders of Africa in full swing. 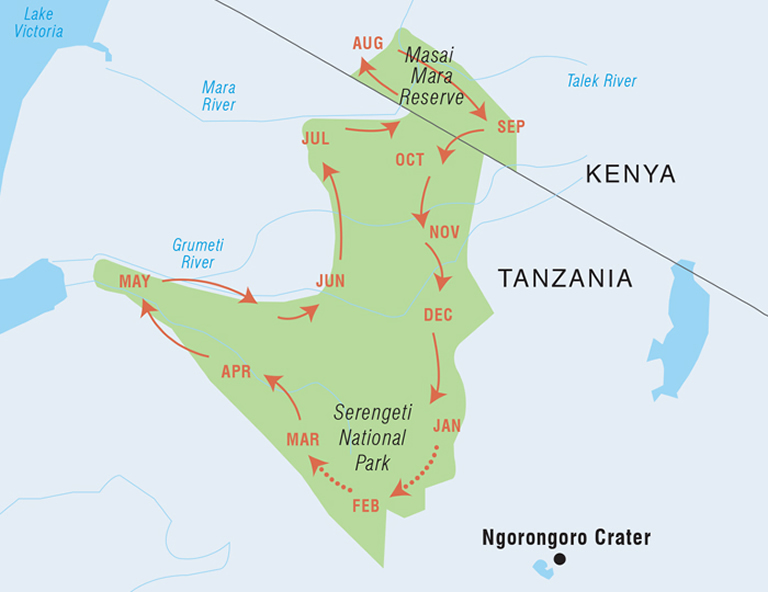 Unique Wildlife Experiences: In Search of India’s Big Cats
02 September, 2019
India is well known for its big ticket items – think the Taj Mahal, the Amber Fort, and the...