I recently had the opportunity to join APT on the Expedition Cruise ship Ms Island Sky sailing along the Kimberley Coast from Broome to Darwin. I knew I was in for an amazing experience but this surpassed even my own expectations. It is a vast...
01 October, 2019 I recently had the opportunity to join APT on the Expedition Cruise ship Ms Island Sky sailing along the Kimberley Coast from Broome to Darwin. I knew I was in for an amazing experience but this surpassed even my own expectations.

It is a vast and remote region and the colours of the natural landscape are so vivid, sandstone so red and the ocean an unbelievable teal blue. The APT Expedition crew and indigenous guides opened our eyes and minds up to the Kimberley spirit which connected us in a memorable way to this ancient and magnificent land.

I felt so privileged to be onboard with APT visiting this unspoilt region of our Western Australian coastline. There is no pollution, and not one wildlife species is as yet extinct. This Island Sky ship is luxuriously fitted out and well appointed for all of their expedition cruising journeys around the world, including our cruise though the Kimberley. 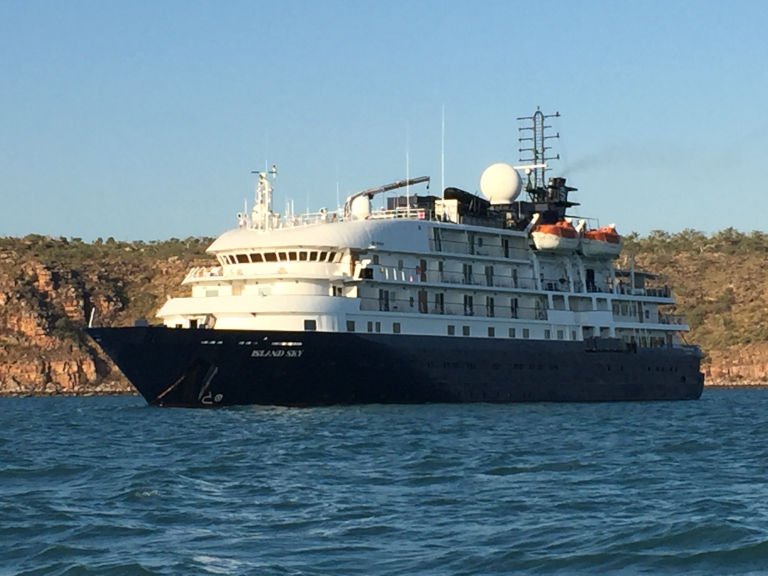 My air conditioned cabin with a balcony was very spacious and comfortable and the bathroom was stocked with fluffy towels and Molton Brown toiletries – my home away from home. The cabins provide a hair dryer, fridge, and a 24 hour laundry service which is available for a fee. The prices quoted onboard are GBP so I was prepared for the bill when it was converted higher into AUD.

Cabins have two pin American socket so an adaptor is required however an Australian power plug can also be found positioned behind dressing table side mirror. Also, a power board is in on the cabin desk providing four USB ports – handy for recharging mobile phones and iPads after taking so many photos. Mobile phone coverage is not available due to the remote location but Wi-Fi is generally available to keep in touch by emails.

Along the way I found the APT App was great for checking on weather and daily itinerary. 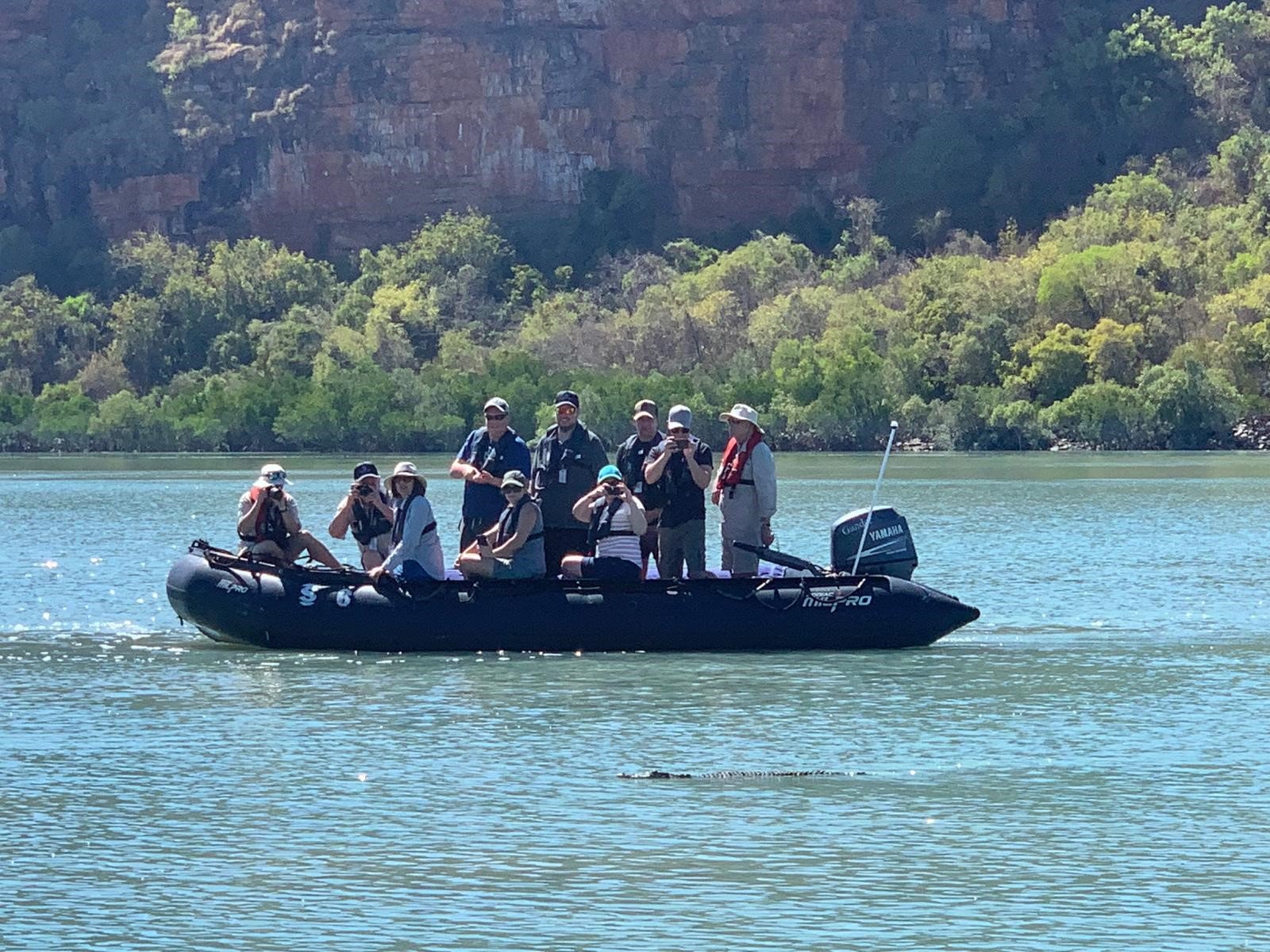 The ship is equipped with large inflatable zodiacs and all sightseeing is done on these, each carries 10 people. Once the friendly crew educated us on how to get on and off the zodiac safely (a set procedure quickly learned!) we were on our way for several exciting hours of exploration. The zodiac trips were either a zodiac cruise or a ‘wet landing’ where we slid out of the zodiac into the shallow water to wade up to the sandy beach or shell adorned island. Sometimes we were swamped by a small rogue wave and had been forewarned: prepare to get your legs wet! This created more laughter rather than being any drama. The weather was hot, hot, hot so we soon dried off.

We could either keep the “wet shoes” on for walking around the area for our sightseeing excursion (proper sandals - no breakable thongs) or change into dry footwear on chairs and towels set up by the ships crew close to shore. This is luxury expedition cruising!

We were always accompanied an expedition team member, which could be a marine biologist or a geologist or ornithologist, or skilled photographer, and we could not help but be enthused and inspired by these professional and passionate naturalists.

We arrived on a falling tide where the entire reef appeared to “rise up” out of the ocean as the tidal waters fall away. Up to 5 metres of reef can gradually emerge from the ocean as torrents of water cascade down numerous channels cutting through the reef and creating waterfalls. This is the only reef in the world that this happens due to tidal activity so its unique and located just 20 km off our Kimberley coast. Marine animals arrive to feed including large turtles popping their heads up in the water and many breeds of birds stalk over the reef looking for their next catch.

This is the site of the artwork of Wandjina spirit figures painted on the large rock gallery walls. This indigenous rock art is ancient and estimated to be over 4,000 years old. Aborigines believe the Wandjina spirit figures control the weather and rain and are “spirits of the clouds”. On the day we arrived here to explore, we were welcomed on arrival with a “smoking ceremony” by members of the local indigenous tribe. 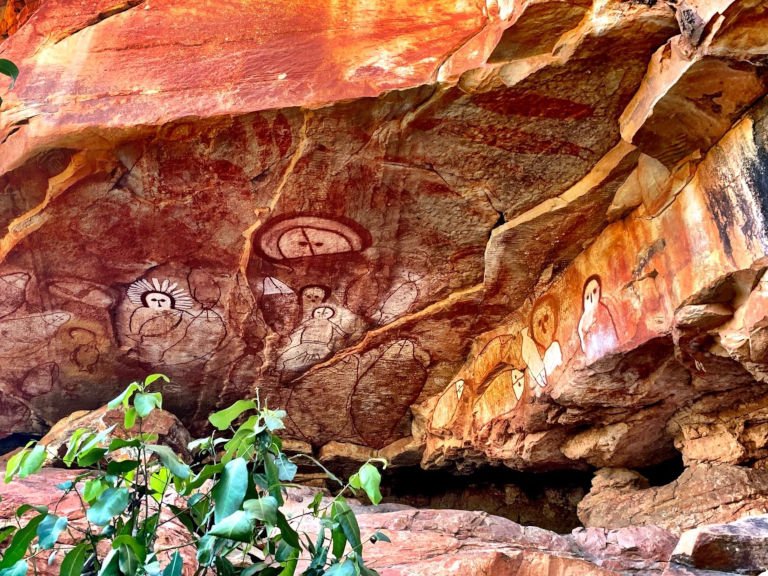 Horizontal Falls are located in Talbot Bay in the Buccaneer Archipelago. Again, this is a phenomenon unique to the Kimberley and Sir David Attenborough called them “one of the greatest natural wonders of the world”. The effect of the waterfalls is created by the rapid tidal fall on the ocean side of narrow gaps in sandstone cliffs. Waters on the inland side of the gaps cannot escape fast enough so a “horizontal waterfall” is created by the cascades. Water levels can differ, sometimes by several metres on either side of the gaps.

To describe it another way, when the tide sweeps into the pair of narrow gorges, the water builds up faster than it can flow through them. This creates a waterfall effect but running horizontally, giving the illusion that the water is “falling” across the bays surface.

We viewed the Horizontal Falls three ways, by an exhilarating 10 minute helicopter ride, then a more sedate zodiac ride and finally a fast boat ride zipping up and through one of the Falls in the narrow gaps. 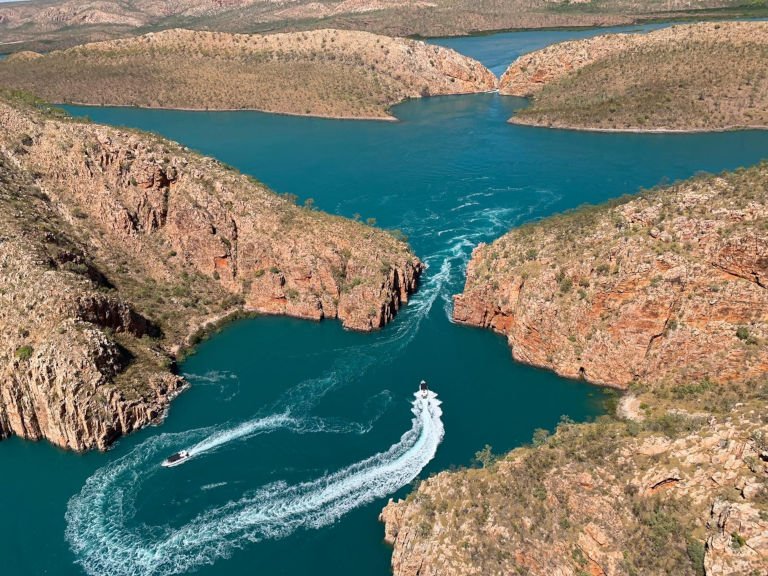 We proceeded up King George river on the zodiacs and as we travelled the 12 kms or so we were flanked by rugged sandstone cliffs which became higher and higher making us feel increasingly smaller and smaller. When we finally reached the end of the gorge the cliffs towered 80 metres above us. We all fell silent taking in the vastness and beauty around us, observing the contrasting and varied colours of the rocks, the height and texture of the gorge cliffs and the many different and interesting shapes of the rocks. When the water is flowing it creates “dual drop” of thundering & spectacular waterfalls. To top off our incredible day, we spotted dugongs and dolphins in the river on our way back to the ship! 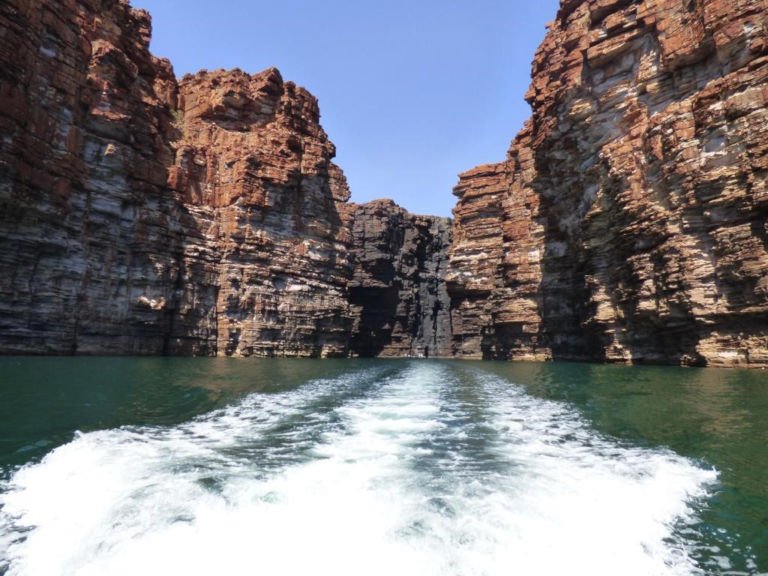 APT advise a good level of fitness is essential to undertake some longer, more challenging walks over terrain with uneven and slippery surfaces in hot conditions. Some walks are physically demanding, up to 3 kilometres in length and may require some clambering over boulders up to one metre high. Sturdy and comfortable walking shoes are a must. Due to this, I would suggest our clients visit the Kimberley while still reasonably active and fit, to get the most of out of their experience.

The Kimberley Coastal cruise is also offered in conjunction with land tours operated by Kimberley Wilderness Adventures (KWA). You might want to look at the Essence of the Kimberley with Grand Kimberley Coast, for example. The land trips involve some early starts and long days due to this distances. I would suggest taking the land tour first with the relaxing at the end with the wonderful and memorable cruise.

If you are seeking a similar Kimberley cruise experience you also might want to consider the Grand Kimberley Coast with Broome Discovery which is another wonderful option for an unforgettable Kimberley experience.