Hiking in the Georgian Caucasus 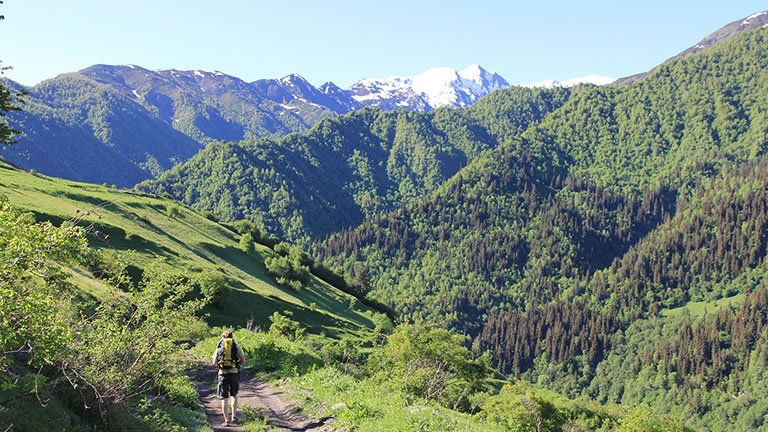 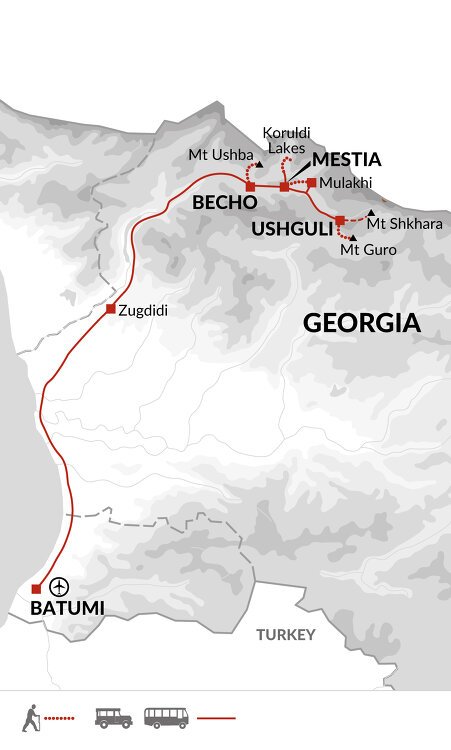 Book online and enjoy exclusive savings on Explore's 9 Day Hiking in the Georgian Caucasus. The trips offers the chance to trek in a fascinating, off-beat region that's just being discovered by tourism. Georgia's Svaneti region has its own unique history and culture and lies among the craggy snow-capped peaks and deep gorges of the Greater Caucasus Mountains. Stay with the proud Svantian people in remote villages with their distinctive koshki - medieval defensive stone towers.

The trip starts today in Batumi, on the shores of the Black Sea. Batumi is Georgia's second largest city and the capital of its Autonomous Republic of Adjara. It is both an important port and Black Sea holiday resort.

There are no activities planned for today and you are free to arrive at any time although please note that your hotel room may not be available until after 2pm. Complimentary airport transfers are provided to all customers arriving today into Batumi International Airport (BUS), which is located just a few kilometres south from the city centre. As the flight most likely to be taken by customers travelling from the UK does not arrive until mid-evening, your leader does not plan to hold the welcome meeting until after breakfast tomorrow (day 2).

Should you have time to explore today, we recommend striking out on foot to stroll along the waterfront Promenade which stretches for several kilometres and is very much the beating heart of the city during the summer months, with many open-air cafes and restaurants. Stay: Hotel Aisi (Comfortable)

Your trip leader plans to meet everyone after breakfast today for a welcome meeting. If you have not already met with the leader, please check the hotel reception area for a notice regarding timings.

After this we set out on our drive north, following the Black Sea coast at first before heading inland, through increasingly dramatic scenery, to the Caucasus Mountains. It's around a five hour drive to our destination for the night, the village of Becho in the region of Svaneti. Becho lies close to the Russian border in the shadow of the magnificent Mount Ushba. At 4,710 metres, Ushba is commonly known as the 'Matterhorn of the Caucasus' because of its distinct spire-shaped summit. Situated on the southern slopes of the central Caucasus Mountains and surrounded by 3,000 to 5,000 metre peaks, Svaneti is the highest inhabited area in the Caucasus. Its valleys are dotted with beautiful medieval villages where you will see many stone towers, or Koshki, as they are locally known, which were originally built in medieval times to protect the villagers from invaders and provide sanctuary from avalanches. It is an area of stunning natural beauty with glaciers, rivers and coniferous forests. The local people, known as Svans, are a distinct ethnic sub-group with their own language and traditions. Stay: Jena's Guesthouse (Simple) (B/D)

Today we drive a short distance up the valley to the start point of our trek near the settlement of Mazeri. Our hiking route starts out following the left bank of the Dolra river, ascending gradually through thick forests on a rocky trail. There are some great views of the beautiful Ushba waterfall along the way. Eventually we cross the river on a wooden bridge to reach a small military encampment in the woods. The Russian border is not far away, just over the mountains. From here the route becomes steeper and the path soon leaves the forest to reach the impressive waterfall at the base of Mount Ushba. You can choose to rest at the bottom of the falls or continue on a steep hike all the way to the top. We plan to have a picnic lunch during our hike and enjoy the views before making our way back on the same trail through the forest to our bus.

In the afternoon we drive deeper into Svaneti to Mestia, the main centre in Upper Svaneti and our base for the next two nights. Mestia is a large villagemall town sited at an elevation of 1500 metres with a population of over 2,600. It's becoming increasingly popular with Georgians and Russians as small a ski resort in winter (there are a handful of runs outside of the town) and a centre for trekkers in the summer months. Quite a few of the old stone dwellings on the northern side of the town still retain their imposing stone watchtowers and these are illuminated at night, an enchanting sight. At the Margiani House museum you can visit a traditional Svantian home and climb inside one of the watchtowers. The History and Ethnography Museum is well curated with information provided in English and well worth a visit if you are keen to find out more about the Svan culture.

Today's 11 kilometre walk is expected to take approximately 6 hours with a total ascent and descent of 980 metres if ascending to the top of the falls, 450 metres to the first waterfall. Stay: Suntower Hotel (Comfortable) (B/L/D)

This morning we make a short journey by four-wheel drive vehicles to Jvari. At an altitude of 2150 metres, Jvari is the starting point for our hike to the beautiful mountain lakes of Koruldi which lie at 2750 metres at the foot of Mount Ushba. The views of the surrounding mountains and their snow-covered glaciers is simply stunning. From the top we hope to see several summits including Mounts Tetnuldi (4800m), Laila (4008m) and Chatini (4012m). We retrace our steps on our return hike to our waiting vehicles and return to Mestia for a second night.

This morning we drive to Ushguli and as the road condition deteriorates past Mestia we'll travel by four-wheel drive vehicles. There's almost a sense of driving back in time on the journey which culminates with a striking view of the four hamlets which make up Ushguli, nestled at the bottom of a steep valley with many brooding medieval watchtowers in sight. Oxen are still used to plough the fields of potatoes and the streets are a often muddy, higgledy-piggledy warren of mainly stone dwellings.

We strike out on the first of our two hikes from Ushguli in the afternoon - the ascent of Mount Guro whose 3070 metre summit overlooks the village. The hike starts with a steep climb out of the village and continues steeply upwards through pastures rich with many wildflowers including orchids and wild tulips. We'll take our time to enjoy the views which open up to show us Mount Shkhara (Georgia's highest peak at 5201m), Mount Tetnuldi and Mount Laila. The panorama from the top is simply stunning and we spend time here before making our way back down to the village.

Today's 10 kilometre walk is expected to take approximately 5 to 6 hours with a total ascent and descent of 800 metres. Stay: Hotel Koshki (Simple) (B/L/D)

Mount Shkhara is Georgia's highest mountain, standing at 5201m, it's the eastern anchor of an imposing 12 kilometre long ridge known as the Bezingi Wall. Our walk to the foot of the glacier at the base of the mountain follows the course of the Enereti River back to its source along a surprisingly flat trail and for the most part we are rewarded with spectacular views of the mountain. Wildflowers carpet the grassy valley and purple orchids can be seen in bloom along the banks of the river. As we reach the final approach to the glacier the path becomes steeper and terrain rockier. Finally we reach the tongue of the glacier, with incredible views up to the craggy, snow-covered sides of Mount Shkhara. We return on the same route to Ushguli.

This morning we take four-wheel drive vehicles once again for the journey back towards Mestia, stopping en route at the small village of Mulakhi. The vehicles then depart with our main luggage for our hotel in Mestia, while we continue on foot on the final hike of the holiday which takes us all the way back to our hotel. The trail skirts around the side of a valley and passes through several small settlements and takes in superb views of the mountains all the way back to the Mestia valley. We'll enjoy a picnic lunch with views along the trail. Today's 14 kilometre walk is expected to take approximately 5 hours with a total ascent of 520 metres and descent of 650 metres. Stay: Suntower Hotel (Comfortable) (B/L/D)

Leaving the mountains behind us today we make our way back to Batumi via the town of Zugdidi. There should be some time on arrival for a seafront stroll or perhaps head to the city centre to admire some of the city's eclectic architecture. Traditional 19th-century Russian houses, soviet-era apartment building and ultra-modern high-rise constructions lie within a few blocks of each other. Stay: Hotel Aisi (Comfortable) (B)

The trip ends today after breakfast at our hotel in Batumi.

There are no activities planned today, so you are free to depart at any time. If your flight is departing later in the day luggage storage facilities are available at our hotel. If you would like to receive a complimentary airport transfer today, you need to depart from Batumi International Airport (BUS), around 15 minutes drive from the city centre. (B) 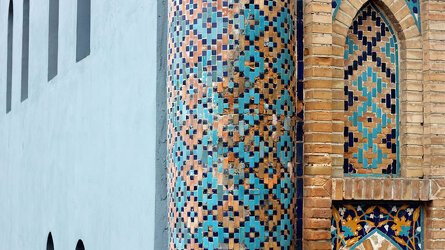 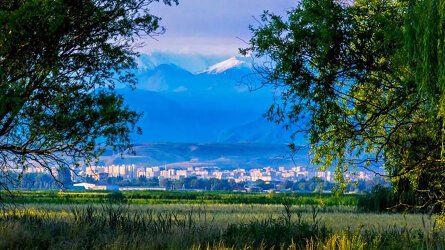 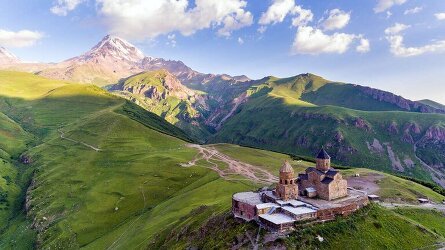 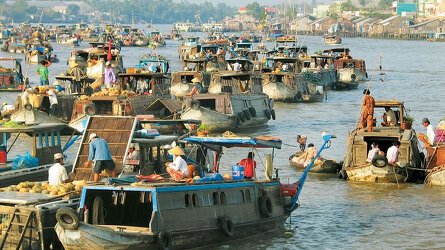 From Hanoi From Kathmandu From Negombo