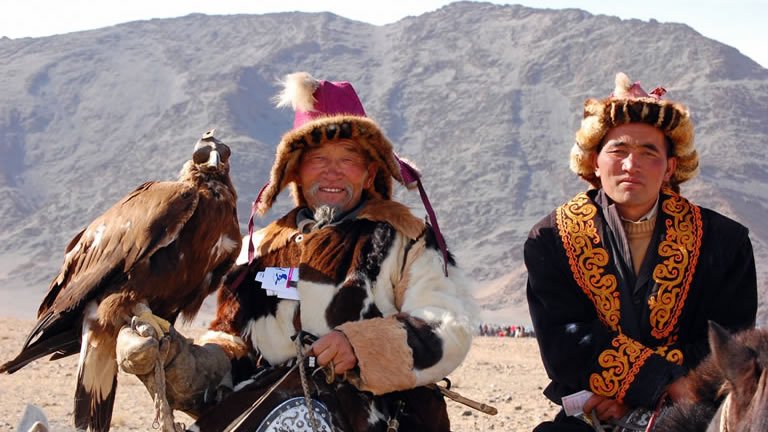 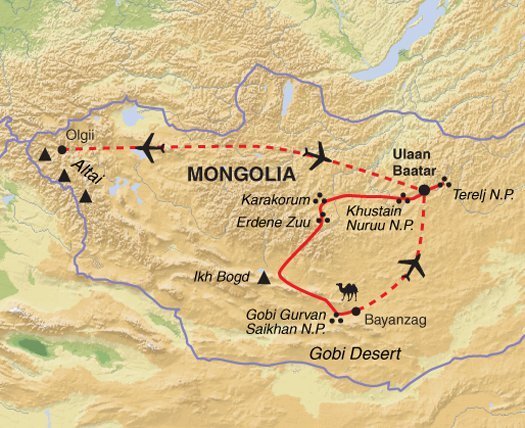 Book online and enjoy exclusive savings on Exodus 17 Day Mongolia Eagle Festival: Steppes, Deserts & Nomads. Rolling steppe make way to stark desert; small nomadic ger camps pepper this vast land where camels and goats are herded on horseback, fermented mare’s milk is the tipple of choice, sand dunes are known to ‘sing’ and the first intact dinosaur eggs were found. Genghis Khan went forth from here on horseback to conquer the biggest land empire in history and, to this day, Buddhist and Animist traditions mix.

We travel through steppe, mountains and the Gobi Desert exploring the nature...read more and culture of this fascinating, yet little known country before making our way to the far western reaches to visit the Eagle Festival, celebrating the fascinating past time of hunting with eagles and the strong connection the Mongolian people have with their animals and land.This departure of the Eagle Festival tour visits Gobi Gurvansaikhan N. P. at the start of the trip.

The group flight is scheduled to arrive in Ulaanbaatar this morning. The tour starts at our hotel in the city centre. This afternoon/evening there will be a welcome briefing in the hotel, followed by a group welcome dinner. Stay: Standard Hotel (D).

Early morning flight to Dalanzadgad, the capital of South Gobi province, then proceed to the Gobi Gurvansaikhan National Park. Gobi Gurvansaikhan means 'Three Beauties of the Gobi' and this range marks the eastern end of the Gobi Altai mountain range. The park's landscape is extremely varied, with rocky and sandy desert plains, precipitous cliffs, ravines, salt pans and oases.

We visit a spectacular natural sight of this region - Yolyn Am (approx. 50km/1. 5 hours driving each way). Yolyn Am means Vulture's Mouth and is a canyon so deep and narrow that even in the height of summer winter ice can remain on the valley floor. This region is also renowned for the diversity of its wildlife and many endangered species can be found here, including Khulan, Ibex, Argali and Snow Leopard. We explore the canyon before transferring to a nearby ger camp for dinner and overnight. Ger Camp (B/L/D).

Today we make a short drive to Bayanzag (70 km) known as the Flaming cliffs and hike amongst colourful sands of red, yellow and orange. Bayanzag is a world-renowned dinosaur fossil exploration site, discovered in the 1920s by Mongolian and American palaeontologists. We are free to explore the region and may even be lucky enough to spot dinosaur fossils. After a picnic lunch we head to our camp for the afternoon. Ger Camp (B/L/D).
Drive to the Khongoryn Els sand dunes (approx. 200 km/5 hours driving). The Khongoryn Els stretch for 200km and reach heights of 300 meters in places. They are known as the 'Singing Dunes' because of the beautiful sound that resonates through the dunes on a windy day. The South Gobi has 100,000 camels, typically used by herders to transport their gers. Ger Camp (B/L/D).
Today we have a full day to explore the sand dunes and surrounding area. We will take the opportunity today to visit a camel breeding family and get a glimpse of the way of life of the nomadic herders of these parts. Ger Camp (B/L/D).

Our journey continues through classic Gobi desert scenery of flat stony plains with small rocky outcrops and patches of sand across the Khatan Suudal Steppe. We stop for a picnic lunch and then continue our drive to the Bayan Mountain Range to view some petroglyphs, called Bichigt Khad. The rock inscriptions and pictures here date back to 3000 BC; we will see paintings including depictions of ibex, argali and men riding horses.

It is possible to see some of these from the vehicles (better so with binoculars) but for those who wish, it is also possible to hike up to the cliffs for closer inspection of these Bronze Age works of art (the main cliff is a steep climb for 50-60m and walking poles are required so we usually visit the smaller cliff, which is more accessible). We are in the vechicles almost all day today and cover approx. 385km. Ger Camp (B/L/D).

First we drive to Tsagaan Agui (White Cave), then pass over Taats River, from where the majestic Ikh Bogd Mountain (the highest mountain in the Gobi Altai Mountain Range) should be visible in the distance. We stop for a picnic lunch and then skirt the eastern edge of Mt Ikh Bogd. Drive on to Arvaikheer, the capital of Ovorkhangai Aimag and on the northern edge of the Gobi. We cover around 415km today - expect to be on the go for approx. 11 hours. Stay: Standard Hotel (B/L/D).
This morning we visit Arvaikheer local market and the museum, which contains nature collections, stone figures and Turkic scripts. After lunch we set off for Kharkhorin, stopping en route to visit Shankh Monastery, once the home of the great Mongolian theorist Zanabazar. We arrive to camp in the evening in time for dinner. Total driving: approx. 150km / 4 hours. Ger Camp (B/L/D).

This morning we visit the 13th century capital of the Mongol Empire - Karakorum. Karakorum was established by Ogedei Khan and remained the Mongols power base until Khublai Khan established Beijing as the capital.

Here we will visit the Erdene Zuu Monastery (meaning Hundred Treasures), this is the largest Monastery in Mongolia, built in 1586 under the direction of Abtai Khan on the ruins of the ancient capital. Much of the monastery was destroyed during Stalin's purges of the 1930's but an impressive wall with 108 stupas and a number of temples still remain.

After lunch we drive (for about 2 hours) to the Mongol Els or 'Little Gobi Desert' as it is known, a unique belt of sand dunes in the steppe. We check into a nearby ger camp head out to explore the surrounding region. It is an incredible sight to witness the Bactrian camels wandering the desert dunes whilst horses graze on the green steppe nearby.

We will also visit Mt Khogno Khan, the small temple at its base. This region is also renowned for its birdlife, including steppe eagles. Mt Khogno Khan offers a great spot for bird watching where we will stay for a while before we return to camp in the late afternoon. Ger Camp (B/L/D).

In the morning we head to the Khustain Nuruu National Park, famous for the re-introduction of Mongolia's wild horse (approx. 200 km / 3 hours driving). The Takhi Horse or Przewalski's horse was once native to Mongolia and almost became extinct earlier this century, though thanks to the efforts of several Mongolian and international organizations, these magnificent wild horses now roam once again on the steppes of KhustainNuruu National Park. We will visit the Project Information Centre and take a guided hike to see the wild horses. Ger Camp (B/L/D).

After breakfast we transfer we transfer (for approx. 5 hours) to the Terelj National Park, known for its fascinating rock formations and green meadows carpeted with wild flowers. We spend the day exploring these and also visit the Aryabala Meditation Temple which offers great views out over the park.

After lunch at our camp we will make a short trip to visit a local nomadic family to see how they live and hear about the nomadic way of life, here we will also enjoy a tasting experience of homemade dairy products, such as yoghurt, cheese, curds and traditional salty milk tea. Ger Camp (B/L/D).

After breakfast, we drive to the giant Genghis Khaan Statue, standing at 40 meters tall and made of stainless steel it is quite a sight! Here, we have some time to fully explore the statue and surrounding area before making our way back to Ulaanbaatar where we have the option to go and see a live performance of traditional Mongolian song and dance. Performed by the world famous Tumen Ekh dance troupe, we will see throat singers, contortionists and Tsam dancers. Total driving: approx. 140 km / 3 hours. Stay: Standard Hotel (B/L/D).

In the morning we fly to Olgii in western Mongolia, from where we drive off-road for about an hour to Sagsai village. Here we visit the home of the Kazakh people; there will be plenty to see and do. We spend the day seeing how they go about daily life, taking care of and milking the cows, goats and sheep and we may even get to help process the dairy products.

We will also be able to sample their traditional food and taste home-made yak cheese and yogurt. This is a great opportunity to explore the real way of living like a nomadic family and to personally experience their friendliness and hospitality. In the afternoon we return to Olgii and stay overnight at Ger Camp. Ger Camp (B/L/D).

Today we attend the Eagle festival. For the first day of the festival we will see the competition for the best Kazakh costume, horse racing and archery. In the evening we will see a cultural performance in the local theatre. Ger Camp (B/L/D).
Today we have another chance to witness the competitions and events of the Eagle festival. We will be able to see a demonstration from the eagles and their hunters, a camel race and the lively competition of Kukhbar. Kukhbar is essentially a fighting match on horseback where two riders have to fight over a goat skin each trying to claim possession of it. After enjoying the festivities we return to camp for dinner. Ger Camp (B/L/D).
After breakfast we transfer to the airport for the mid-morning flight to UlaanBaatar, arriving in the nation's capital at midday. We transfer to the hotel and freshen up before a light lunch. This afternoon is free for last minute sightseeing or souvenir shopping around UB - cashmere, leather goods and traditional handicrafts are all good options and the guide will recommend the best places to go for these. Night owls may want to sample the nightlife of UlaanBaatar!Standard Hotel (B).
After breakfast the trip ends in Ulaanbaatar (B).

Sunday 24 Sep 2023
Tuesday 10 Oct 2023
Status
From: $8,649 $8,476
Save $173 Enquire
Sunday 22 Sep 2024
Tuesday 08 Oct 2024
Status
From: $8,849 $8,672
Save $177 Enquire
Key
Definite Departure. Minimum numbers reached for this depature to operate.
Available Departure. Minimum numbers not yet reached, so while this depature is expected to operate, it’s not yet a Definite Departure.
Not Available. Places on this departure are unavailable.
Exclusive Global Journeys Savings. Available for a limited time or until sold out.
Note
Your Global Journeys Travel Advisor will check the availability of your departure date when you enquire. Additional savings may apply. We guarantee the lowest price in Australia. T&C’s apply.
Note
Tour & cruises prices are per person. Prices shown have savings applied, are subject to availability and may be withdrawn at any time without notice. Prices and trip information are correct at the time at this point in time, however are subject to confirmation at the time of booking and are subject to change by Exodus. 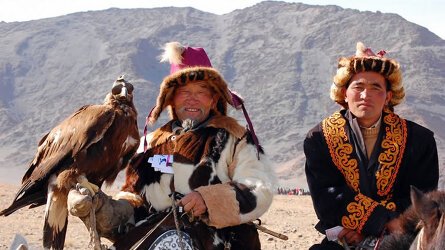 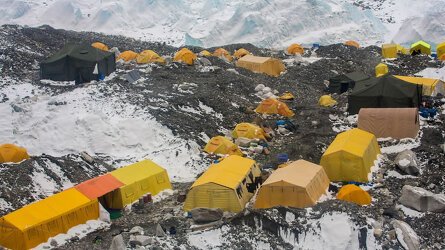 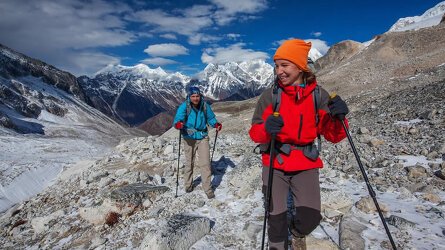