Georgie's 11 Day Highlights of China & the Yangtze with Uniworld

My sister and I ventured off for a trip of a lifetime with Uniworld to China (although I’m definitely going back for more). We decided on the 11 Day Highlights of China & the Yangtze itinerary, beginning in Shanghai and ending Beijing. I loved...
23 August, 2018

My sister and I ventured off for a trip of a lifetime with Uniworld to China (although I’m definitely going back for more). We decided on the 11 Day Highlights of China & the Yangtze itinerary, beginning in Shanghai and ending Beijing. I loved China, every day was full of intrigue, history and tradition. Here’s a brief rundown of what we got up to. My sister and I met up in the early hours of the morning in our most luxurious hotel, the Waldorf Astoria Shanghai on the Bund, in Shanghai (she flew in from New Zealand and myself from Australia). Waking up the next morning we opened the curtains to a view of these beautiful kites which had come to life, dancing and telling stories in the sky, quite magical, whilst looking at the view of the famous bund and Shanghai’s city skyline.

After a city tour and savouring a traditional dim sum lunch - a tasty offering of dumplings, steamed buns, and rice noodle rolls - we enjoyed the rest of the day at leisure exploring this city on our own. The following day we flew to Yichang to join the Century Paragon for our cruise on the mighty Yangtze River. Uniworld take an allocation of cabins on this ship for their guests. We were a small group, perhaps 20 in total, of mostly Americans. My sister and I were the youngest of the group but we got on well with all of our travelling companions and really enjoyed the company of our new found friends.

Although quite a large ship (and very different to a Uniworld Europe river cruise ship), the remaining passengers were Chinese. I will never forget the noise coming out of their dining room every night. It was as if they were celebrating New Years Eve each evening! The raised, excitable voices, dancing, clatter of crockery and cutlery. Really quite entertaining to observe. The Chinese don’t take many holidays – so when they do, they certainly know how to enjoy them!

We were disappointed with the food on the ship – had been looking forward to enjoying the local cuisine, but they served western style food for each meal. I believe in the saying “When in Rome, do as the Romans do”.

The highlights of the 3 day Yangtze cruise was moving through the world’s largest dam – five stages with an overall length of 6.4km and a water level difference of 113m! We walked the bridge over to the Shibao Pagoda, a temple built in the 18th century, without nails and directly into the side of a steep peak. Here we climbed the 12 stories to the top. Floating through Xiling Gorge, which is the longest and deepest of the gorges, with heights of up to 4,000 feet (1,219 meters) – the landscape is straight out of a Chinese watercolour painting.

On Day 7 we looked forward to disembarking the ship and were ready for what was still to come - Chongqing Zoo to see the giant pandas, Museum of the Terracotta Warriors, the Great Wall, Tiananmen Square, Forbidden City and a visit to the hutongs, the historic residential neighborhoods that developed around the Forbidden City during the 15th century.

I don’t usually like Zoo’s, but Chongqing Zoo was fantastic. Large and beautiful enclosures for the animals. We watched the pandas for ages. They’re so funny and playful, just like big cuddly toys. They’re were a lot of them too. They also had lion cubs and beautiful birds (not in the same enclosure of course!). 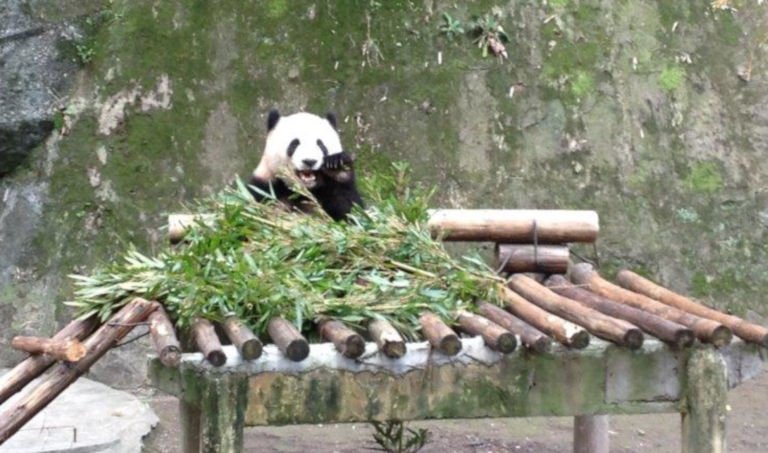 A real eye opener for me was travelling through the cities, and around the outskirts. Take a look at the photo below – rows and rows of apartments, all looking the same that go on and on as far as the eye can see. So interesting. I’ve skipped a few days here, but below you will see a few rare pictures of our day at the Great Wall (Day 10) where we had perfect visibility. Apparently the smog is often bad here and you can’t see far into the distance. Only a small part of the ‘wall’ (compared to overall length) is open to the public, hence the crowds that you often see in photos. But Uniworld do take you to a part of the wall with less crowds, as you can see in the photos below – they must pay a higher rate for access to this part of the wall? We visited in October, so it was lovely to see the leaves turning colour too. You will also notice how steep some parts of the wall are (you do have the option to go the easier climb, or steeper). We went the steeper climb of course! 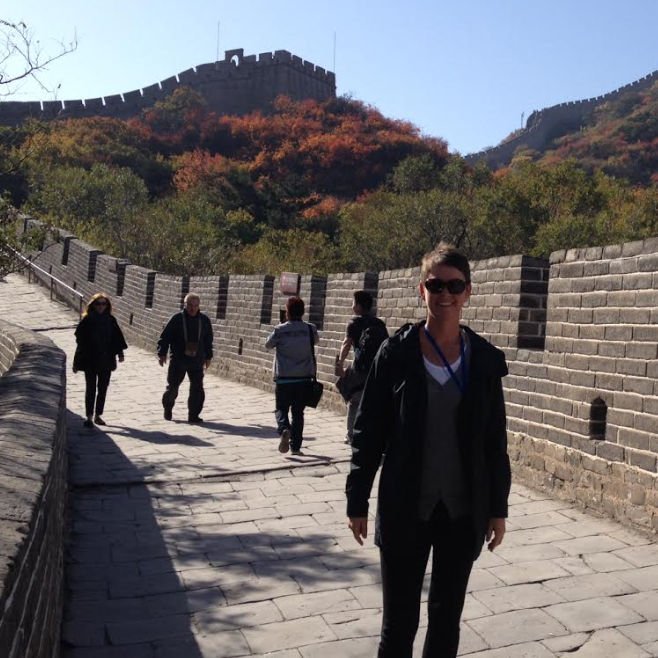 You will also notice how steep some parts of the wall are (you do have the option to go the easier climb, or steeper). We went the steeper climb of course! 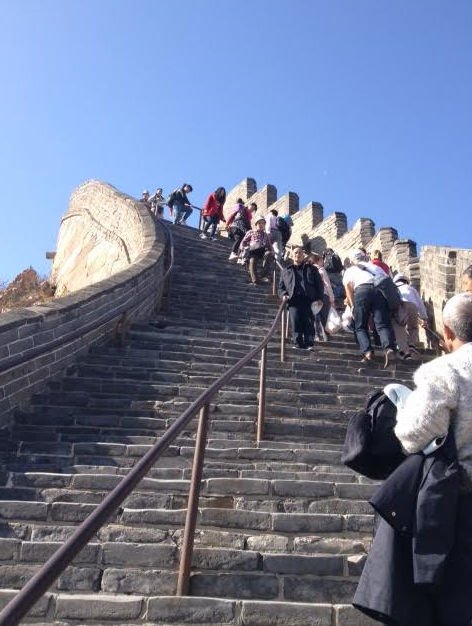 The Beijing Hutongs (old lanes) have a very special place in the rich history and culture of Beijing. The alleys give a wonderful glimpse into yesterday's world. Touristy I know, but we all had a laugh as we toured the narrow laneways by rickshaw. Getting off and on every now and again to look at the shops along the way.

Here we also enjoyed lunch with a local family in their tiny home. This is a brilliant way to immerse yourself into the culture and way of life of the locals.

On the way home we stopped at a silk carpet workshop (I can just see you rolling your eyes!), but here we watched them collect the silk and turn these into robes and bed linen but also as doona inners. I think everyone in the group purchased one of these, including ourseleves and they posted them directly home for us arriving in a timely manner. One of the best purchases I have ever made – living in Queensland the silk inner is perfect for our climate, and so light! My sister actually contacted the same company and ordered another one online when she got home, which again was received quickly and efficiently. The hotels we stayed in throughout his trip were the best I’ve ever been in – large and luxurious rooms, breakfast buffets to die for and service impeccable. Apart from the meals on the cruise, every other meal was memorable from dumpling dinners, to Peking duck.

On the day we flew out of Beijing, the smog was at its worst. I was pleased as I wanted to see what it was really like. Best way to describe the smog is by visualising a grey day with thick heavy clouds. No wonder most people in China walk around with face masks. At the end of the trip I would say that half the group then carried on to do the Hong Kong extension (keeping in mind that our group were mostly American, so I suppose while they were over this side of the world best to make the most of your time).

The river cruise we took is part of Uniworld's Asian River Cruise collection. All in all, we had a fabulous holiday, I am dying to go back for more.